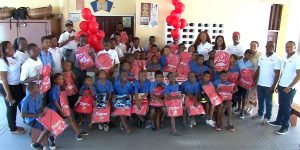 Ahead of  Digicel’s 10th anniversary on February 14th , the phone company has kicked off this milestone by supporting the work of 10 special needs schools and orphanages.

The international phone giant says its 10-day plan will see the delivery of much needed appliances, school supplies, school shoes, food hampers and other items.

The St. John’s Boys Orphanage was the first stop in a series of visits. Head of Marketing Jacqueline James along with several members of staff joined the boys and administration on Monday as they delivered breakfast, school shoes, school packs, school items, a washing machine and other supplies that were needed by the orphanage.

“We are happy to be here with you as we will soon be celebrating our 10th anniversary, we would like you to know that we are here to support you, young people and we will always be here to lend a helping hand” said James to the small gathering.

After the handing over of the items to Director Sister Julie Matthews, staff members were more than happy to assist the boys in finding their sizes so they could be off to school in their new shoes and new backpacks. 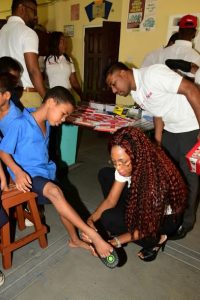 St. John’s Bosco Orphanage was established in 1879 by Fr. Luigi Casati an Italian missionary when he gave shelter to a number of boys in Plaisance. St. John’s is home to fifty boys between the ages of 3-6 years old.

Digicel says it remains committed to its Corporate Social Responsibility and its focus on charity and special needs remains at the top of their list. Special Needs intervention is central to their mandate throughout the Caribbean and Central America and they are committed to enhancing the welfare of children with special needs across those markets.

Digicel Group is a total communications and entertainment provider with operations in 33 markets in the Caribbean, Central America and Asia Pacific. After almost 14 years of operation, total investment to date stands at over US$5 billion worldwide. The company is renowned for delivering best value, best service and best network. 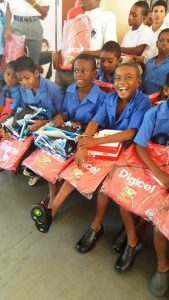 Digicel is the lead sponsor of Caribbean, Central American and Pacific sports teams, including the Special Olympics teams throughout these regions. Digicel sponsors the West Indies cricket team and is also the presenting partner of the Caribbean Premier League. In the Pacific, Digicel is the proud sponsor of several national rugby teams and also sponsors the Vanuatu cricket team.

Digicel also runs a host of community-based initiatives across its markets and has set up DigicelFoundations in Haiti, Jamaica, Papua New Guinea and Trinidad and Tobago which focus