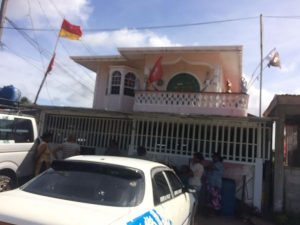 The house and upholstery of the Boodhoo at Chimney Road, Chateau Margot where the robbery occurred.

Bandits grabbed more than GYD$12 million in cash and jewellery from two businessmen in two separate robberies on the West and East Coast Demerara on Tuesday, police said.

Assistant Police Commissioner, Leslie James said five men attacked the home of a gold smith at De Willem, West Coast Demerara. “They went there under the pretext of seeking to have gold jewellery done and then one of went back to the car and returned with a handgun and stuck them up,” James told Demerara Waves Online News.

He said the bandits then took the goldsmith and his family inside the house, duct-taped them and ransacked the premised. In the end, he said they carted off GYD$20,000, US$200 and a quantity of gold jewellery valued about GYD$6 million.

James said no shots were fired and no one was arrested in connection with the incident that occurred about midday.

About the same time, an upholsterer and his wife were robbed of GYD$6 million shortly after she returned to their 31 Chimney Road, Chateau Margot residence.

Sources said Indranie Boodhoo had just arrived home when two bandits, one of whom was armed, exited a car and pounced her. They demanded that she hand over the bag but she tossed it to her husband, Mulchand Boodhoo.

They then confronted him, placed the gun to his head, grabbed the bag and sped away. They escaped in a silver Allion car.