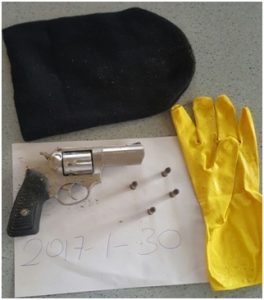 Four bandits invaded a house at Middle Road, La Penitence, Georgetown and held a woman at gunpoint before carting off with cash and valuables.
They left behind a handgun, black toque and a yellow glove while escaping from police.  “The police, having been notified of the robbery whilst it was being committed responded promptly. On arrival the suspects were seen fleeing the scene. They were perused but managed to jump a northern fence and escaped. The area was searched and the ranks found a .32 revolver, a black toque and a yellow glove,” police said.
Police said the bandits stole GYD$4,500.00,  one cell phone and a handbag containing documents.
The robbery victim- Komattie Kissoon, 25 years, of Middle Road, La Penitence- told police that at about 2 AM four males, one of whom was armed with a handgun, attacked her in her house. “The victim was in the lower flat of the house, resting on a chair, when she was confronted by the men who held her at gunpoint and demanded cash and valuables and she handed over the items aforementioned, after which they fled and she made an alarm,” the Guyana Police Force said in a statement.