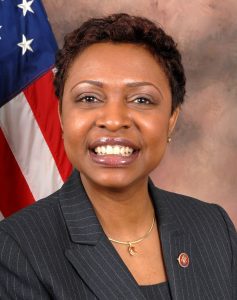 United States Congresswoman, Yvette Clarke, -who is of Caribbean roots- Sunday night said she was worried that President Donald Trump might add Guyanese to the list of nationals whose citizens are banned from entering his country.

“I am concerned that he could expand that if we don’t organise and push back now. We know that in the Caribbean region there is a very healthy Muslim population from Guyana, to Trinidad, to Jamaica across the board and so we have to make sure we come together,”she told an emergency meeting in Brooklyn, New York.

Many Trinidadian Muslims have gone to fight for the Islamic State mainly in Syria. Several have since fled the repressive socio-economic and political conditions in those countries and have returned home where they are said to be subjected to monitoring by police.

Trump has temporarily banned holders of non-immigrant visas and permanent residency cards from entering the US once they are originally from Syria, Iran, Libya, Somalia, Sudan and Yemen.

Clarke, who has Jamaican roots, warned that the Republican Party would be defeated at mid-term elections due in another 18 months if the Muslim population in the US turns out in its numbers. “In particular, the Muslim community can make a difference in these elections if they register and they vote,” she told the mainly Muslim attendees at the meeting.

A New York judge has since issued a temporary order restraining authorities from blocking nationals of those countries from entering the US.  The final ruling could determine the future of Trump’s immigration restrictions.

Congresswoman Clarke announced that she would be heading back to Washington DC where she would be mountinh unrelenting pressure on government to reverse the ban.