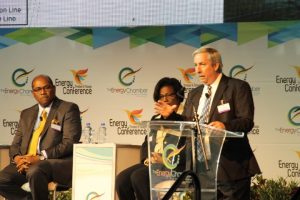 ExxonMobil’s Country Manager, Jeff Simon delivering a presentation at the 2017 Trinidad and Tobago Energy Conference. That session was chaired by Nigel Hughes of the Guyana Oil and Gas Association (GOGA).

ExxonMobil will eventually scale back hiring exploration support from Trinidad-based companies and will instead turn to a shore-base operation in Guyana for production operations, even as it eyes exploring two other potential oil reservoirs, Country Manager, Jeff Simon announced.

He said the company was evaluating its latest oil find at Payara, and considering exploration at two other locations- Liza 4 and Snook.

“We are kind of feeling our way forward and as we learn from what we drill we are constantly assessing how we are going to drill the next one and the next one, but right now it’s Payara at this point and then we have one other one that’s lined up next and that’s called Snook and then we will go forward there and then figure out what’s next,” he said.

“Right now, there is a handful of things that we are looking at but it is going to be highly driven by the results of what we do with Payara,” Simon added.

He said ExxonMobil was currently considering a “wide range” of the volume of oil found at Payara. A previously drilled well named SkipJack has turned up mostly water.

Simon explained that the typical drilling supplies are being sourced from Trinidad, but the next drilling campaign would see huge amounts of cement being taken to the shore-base in Guyana aboard 300 feet draft supply vessels that could be accommodated in the Demerara and Berbice Rivers. 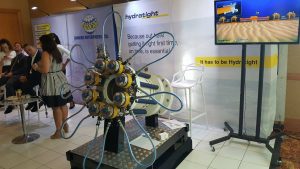 Exhibits at the Trinidad and Tobago Energy Conference.

“We are doing a little better on this campaign, but as we go more into this extended development drilling campaign we expect to move many more goods and services over to Guyana where in fact it makes sense,”  he told the Trinidad Energy Conference 2017 on Tuesday.  “As we mobilize more goods and materials, it’s six to seven hour trip out to the rig there,” he said.

The current drilling operation, he said, is being supported by three helicopters; four supply vessels for one rig that shuttle between Guyana and Trinidad. “We need that number of vessels for a single rig at the moment because so much of that travel is a 30 to 40 hour trip to Trinidad to pick up goods and supplies,” he said.

Simon said after drilling for more than one year now out of a shore-base in Georgetown, that facility has outgrown potential for products and supplies.  In preparation for the arrival and mooring of Floating, Production, Storage and Offloading (FPSO) offshore Guyana to collect oil from the 17 wells via umbilical cords and flow-lines, he said some of the equipment would be assembled in Trinidad.

“A lot of the kit and equipment is so large that we really don’t have the facility in Guyana to handle it,” said in reference to the draft of the rivers and the capacity of the existing shore-base. 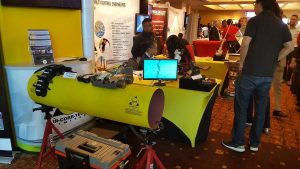 President and Chief Executive Officer of Energy Chamber of Trinidad and Tobago, Dr Thackwray Driver told Demerara Waves Online News that a lot of ExxonMobil’s exploration work is being staged out of Trinidad and Tobago’s well established energy services sector. “We know that there is an intention to develop the support industry in Guyana to increase local content and Trinidadian companies are very open to working with Guyanese companies to help them to get up to the required level to be able to support the industry,” he said.

Driver said the drilling and installation work offshore Guyana would continue out of Trinidad until oil production begins in 2020/ 2021. 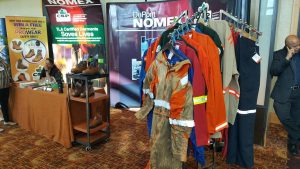 Personal Protection Equipment at the Trinidad and Tobago Energy Conference.

Then, ExxonMobil will begin extracting 100,000 barrels of oil from wells located about 190 kilometers offshore. There are nine injection wells. The oil will be offloaded to an FPSO from where tankers will collect supplies for processing at a refinery yet to be determined. Guyana’s oil so far has been described as light, sweet crude.

While the ExxonMobil official named Trinidad’s state oil refinery, Petrotrin, as one of the possible oil refineries, that country’s former Energy Minister, Kevin Ramnarine has said that retrofitting that refinery would cost a lot of money. He said Guyana’s oil could be used by Petrotrin as diluent.

So far, ExxonMobil has found almost 2 billion barrels of oil at Liza, excluding Payara which has not yet been officially quantified.