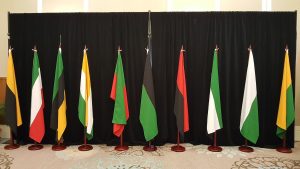 Plans are moving apace for several of Guyana’s 10 administrative regions to begin flying their regional flags later this year, even as the main opposition People’s Progressive Party (PPP) has rejected the move for the seven regions that it controls.

Allen said she would be tabling the proposal to the Region four Democratic Council (RDC) on Thursday , January 26, 2017 with the expectation that region-wide community consultations would begin early February and conclude in time for the April 30 to return to the NRDCC with a decision. She said the issue is not about the colours of the flags because those have been drawn from Guyana’s national flag, the Golden Arrowhead, but rather about the symbols.

In the case of the proposed Region Four flag, the symbol is Stabroek Market.

The Regional and Neighbourhood Democratic Council (NDC) Chairmen, Vice Chairmen, Mayors and Deputy Mayors from the seven PPP-controlled RDCs, towns and NDCs had boycotted that meeting, citing late invitations and no prior consultations about the NRDCC’s establishment. They have already expressed concern about the planned introduction of the regional flags. “These Regional Councils have opposed this and believe the event in question appears to be one contrived to impose these on the Regions,” the PPP said in a statement.

Opposition Leader, Bharrat Jagdeo on Monday noted that the RDC elected officials have rejected the regional flags and other related symbols because they smack of segregation. “We made it clear. We do not want ten flags in Guyana. We don’t want to Balkanize Guyana. We don’t want flags and anthems for every region. We are Guyanese regardless of where we live and so the PPP is totally opposed to that,” he told a news conference.

The PPP won seven of Guyana’s 10 administrative regions at the 2015 general and regional elections as well as 48 of the 71 local authorities and three towns at last year’s local government elections.