BREAKING: One dead, one injured in ice plant explosion at fishing wharf 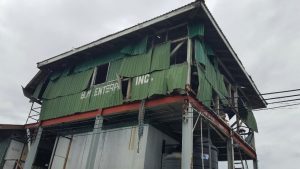 One man was Sunday morning killed and another injured in an explosion at an ice plant at Houston wharf.

The dead man has been identified as Bhagwandie Lall.

Repairs were being conducted on the plant at the time of the incident at BM Enterprise/ KB Enterprise.  “They were doing welding explosions and apparently the gas was in the atmosphere with the heat and there was an explosion and the person who actually was doing the job fell and broke his neck and he got some minor burns,” Divisional Fire Officer, Compton Sparman told reporters.

The men were in an elevated area at the plant when the explosion occurred, ripping out the zinc walls of the building and pitching them out 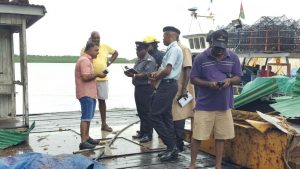 The body of the dead man covered in a blue tarpaulin whole police and fire service personnel spoke with one of the company’s officials in the short blue pants and pink shirt.

Sources said the dead man’s throat was severely gashed and his limbs broken. The other man sustained burns and he was rushed to the Georgetown Public Hospital Corporation.

2017-01-22
Denis Chabrol
Previous: Dancing on Black Ice Part II: The Reply to Nandlall on the GECOM Brouhaha by Vivian Williams
Next: Legal delay in introduction of paid parking in Georgetown