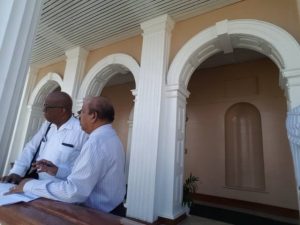 Finance Minister, Winston Jordan has warned that government would take stern action against a small number of players who are responsible for instability in Guyana’s foreign exchange market, even as he sought to allay fears of a foreign exchange shortage.

“We will continue to use moral suasion to return the market to stability. But the Government stands ready to act decisively, if our current entreaties fail,” he said Friday at the opening of the new headquarters of Citizens Bank.

He singled out a small number of “bigger banks” that appear to be spearheading distortions in Guyana’s foreign currency market.

Recently, the Bank of Guyana stopped buying Trinidad and Tobago, and Barbados dollars from cambios after authorities found out that persons were coming to Guyana with huge amounts of those currencies and selling them before buying large sums of American dollars to satisfy scarcities in those sister Caribbean countries.

Contacted Saturday evening, Jordan declined to divulge his plan of action, but again warned that that the administration would not stand idly by and allow unnecessary distortions in forex market trading. “The government would not remain inactive while the market is manipulated by one or two dominant players,” he told Demerara Waves Online News.

In his remarks at the opening of the new Citizens Bank headquarters at Camp Street and South Road,  the Finance Minister stopped short of naming the small number of participants in the foreign exchange market, option only to say non-bank cambios and exporters also have a responsibility to ensure their conduct does not have a negative impact on the foreign exchange market and the macro economy.

He said large spreads (GYD$208 to US$1.00 selling / GYD$215 to US$1.00 buying on Saturday, January 21, 2017) between the buying and selling rates for foreign currency, especially by bigger banks, have led to some level of disintermediation.

“These banks act as the pacesetters in the pricing of foreign currency and interest rates. They have great influence in creating uneven competition for smaller banks. These developments have artificially stressed the foreign exchange market. They have the potential of destabilizing Guyana’s fragile economy that is finally from the post General Elections stress of 2015,” he said.

“In a market with limited players, in which one or two are dominant, it is incumbent on all to act responsibly, to play by the rules, so as to avoid disintermediation and interruption of orderly flows of foreign exchange,” he said. He said due to heightened speculation in foreign exchange market activities commercial bank cambios must now undertake the necessary due diligence to ensure orderly market behavior- a move he said is  “positively impacting the market.  While Jordan stated that there is enough foreign exchange, he said “the Bank of Guyana will continue its interventions in the market as warranted.”

The Finance Minister said In spite of the fall-off in export earnings of sugar, rice and timber, foreign exchange reserves being held by the Bank of Guyana now total US$616 million up to December 31, 2016 while commercial banks’ foreign reserves totaled US$315 million, at the end of 2016, roughly the same level as in 2015.

He said last year, the Bank of Guyana sold approximately US$30 million to commercial banks to smooth out spikes during seasonal demand and another US$12 million to the bank cambios  during November –  December 2016 to ensure adequate flows of foreign exchange to the market.

The Finance Minister reasons that the floating exchange rate market that dates back to 1989 has recently come under stress die to recent reporting of a “contrived shortage of foreign currency” and hysteria that has been cultivated by some market participants.

He explained that several major companies have been seeking to pay for imports and repatriate profits earlier than required in the usual business cycle. This has created a surge in demand for foreign currency, thereby clogging the market.”