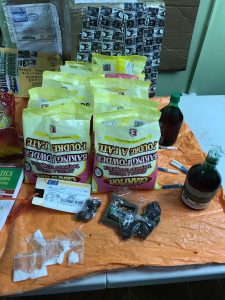 A man, who recently completed a four-year jail term for cocaine trafficking, is back in custody for allegedly attempting to ship cocaine to Canada in baking powder bags and Banko wine bottles.

The consignment of drugs was due to leave on Fly Jamaica Friday evening.

Singh said subsequent checks let to the shipper being found hiding in a house in South Ruimveldt . He was arrested and will be put before the courts next week, the CANU Chief said.
This individual was recently released from Camp Street Prions after completing a four year sentence for attempting to ship cocaine in households products to West Africa, CANU said.