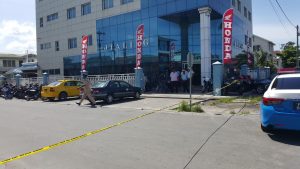 A man was shot during an armed robbery committed on a woman outside Jialing auto store at Charlotte and Oronoque Streets, Georgetown.

“A” Division Commander, Assistant Commissioner Clifton Hicken told reporters that at about 12:15 PM police responded to a report of gunshots outside that business premise.

He said investigators have so far learned that a male and female  arrivedin a vehicle on the western side of Oronoque Street to  transact business at Jialing when they were attacked by armed bandits. “A vehicle was parked on the eastern side of the road. Two men got out of that vehicle (and) one of them took the money – in excess of one million dollars- she had in her possession. The driver was shot to his right leg during the process,” Hicken told reporters at the scene.

The driver was rushed to a nearby city hospital.

The Divisional Commander said investigators hoped to retrieve video surveillance footage from nearby buildings and trace the license number plate of the car that the bandits were travelling in. “We are going to do everything possible to ensure the perpetrators are brought to justice,” he said.

Police have so far retrieved two spent .32 spent shells from the scene.