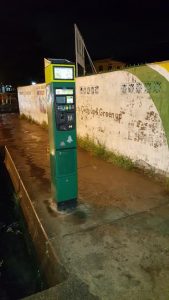 Te parking meter on the Avenue of the Republic pavement between America and Croal Streets.

The National Commission on Disability (NCD) on Tuesday expressed concern about the erection of several parking meters virtually in the middle of pavements, saying that they would pose problems for blind and wheelchair bound persons.

“Our concern from the Commission’s point of view is that it is discriminating against persons with disabilities in particular the blind because of the fact that their only means of moving around is with their cane independently and if you are going to put the parking meters on the pave, it is likely that you will be obstructing their flow of movement,” Advocacy Coordinator, Avonelle Corrica told Demerara Waves Online News.

Parking meters almost in the centre of pavements are located on Main Street near Guyana Stores,  Avenue of the Republic between America and Croal Streets, and Water Street outside Muneshwer’s Building. A parking meter base has been already placed on the Robb Street pavement outside Republic Bank.

She said the commission intends to meet again with City Mayor Patricia Chase-Green to raise concerns about the placement of several of the parking meters because of insufficient time at a previous round of talks.  The NCD also intends to meet with the NCD to file its objection to the placement of a number of the meters. “We are not in favour of the parking meters on the pavement because of the fact that will prevent persons with disabilities in particular the blind from free movement,” she said. The Commission, she said, discussed the implications of the location of a number of the meters last November. 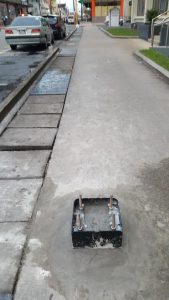 A parking meter base already installed on the Robb Street pavement outside Republic Bank.

The Guyana Council or Organisations for Persons with Disabilities was not immediately aware of the situation and planned to inspect several areas around the city where the meters have been installed virtually in the middle of the designated pedestrian thoroughfares.  “Anything that is going to be in the middle of a pavement is going to be a severe hindrance for persons with disabilities. If you use a wheelchair, it’s difficult to get around it. If you are blind, it’s not something you are accustomed to because blind persons count their steps and they know how to avoid obstacles so if that is a new thing there they will walk straight into it,” said Council Chairman, Leon Walcott.

Spokesman for Smart City Solutions, Kit Nascimento said he was disappointed that concerns are being taken to the media instead of contacting the parking meters’ company before. He promised that the concerns by the organisations representing disabled persons would be examined.

The National Disability Act prohibits the construction of any facilities that would impact negatively on disabled persons. In the area of accessibility, the Persons with Disabilities  Act states that the Commission shall collaborate with public or private sector agencies to ensure the  attainment of a barrier-free environment that will enable persons with disabilities to have access to public or private buildings and establishments.

Metered parking will take effect on January 23, 2017 and, according to the City Council, this will be a major source of revenue to rehabilitate and maintain the city.