GECOM Chairman: Legal showdown looms over appointment ; Granger once nominated though not a judge 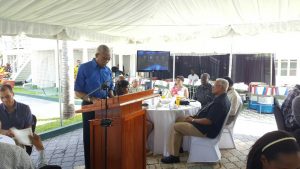 The opposition People’s Progressive Party (PPP) plans to challenge the appointment of the next Chairman of the Guyana Elections Commission (GECOM) if President David Granger ignores the list of six names dispatched to him by Opposition Leader Bharrat Jagdeo, former Attorney General Anil Nandlall said.

“A number of options are available. Definitely, among them would be a legal challenge because in our view the law is clear. If President Granger is right, it means every President can mechanically reject a list irrespective of the names of the list and then say a proper list has not been sent and appoint a person of his own choice,” Nandlall told Demerara Waves Online News.

The PPP believes that Granger is setting the stage to appoint someone of his choice. The Constitution is silent on the submission of a second list.

Reacting to Granger’s assertion that Guyana’s Constitution emphasises that a current or sitting judge or someone eligible to be a judge in Guyana or the Commonwealth Caribbean should preferably be appointed GECOM Chairman, Nandlall noted that Granger had been nominated for that post in 2000.

“I would presume that Mr. David Granger would have accepted the nomination and agreed for his name to be put there. The Constitution has not changed since. Is Mr. Granger now telling the nation that both himself and Mr. Hoyte violated the Constitution?” Nandlall added. Among then Opposition Leader, Desmond Hoyte’s nominees had been Retired Judge, Rudolph Harper.

“That argument alone, without more, demonstrates how wrong the President is on this issue,” he said, adding that the Guyanese leader is receiving bad legal advice.

The Constitution also allows for a fit and proper person to be appointed.

Ahead of the 1992 General and Regional Elections, Hoyte had himself selected Ambassador Rudy Collins from among the list of names that had been submitted by then Opposition Leader, Cheddi Jagan.

All of the GECOM Chairmen that have been appointed so far from 1992 to present were not serving or former judges. They are Collins ; gold miner, Edward Hopkinson; Senior Counsel, Doodnauth Singh; ,  Retired Major General Joseph Singh and Veterinary doctor, Steve Surujbally.

The current controversy was sparked off by President Granger’s announcement on Sunday that he has rejected the Opposition Leader’s list of  six nominees as “unacceptable” because the Constitutional preference is for a  judge or former judge.

While Jagdeo has said that his list of names has emerged out of consultations with religious, trade union and business organisations- though not a constitutional requirement- the African Cultural and Development Association (ACDA) has called on the President to reject the list on the basis that Afro-Guyanese organisations have not been consulted.

General Secretary of the Guyana Trades Union Congress (GTUC), Lincoln Lewis, who participated in the consultations with the Opposition Leader has observed that “on the appointment of Chairman for GECOM the Guyana Constitution (Article 161) never singularly stipulated that such should be a judge or eligible to be one.”

Lewis, too, noted that then Opposition Leader, Hoyte was the one who put forward Dr. Surujbally’s name although he  is a veterinarian by profession and was not qualified in legal studies.