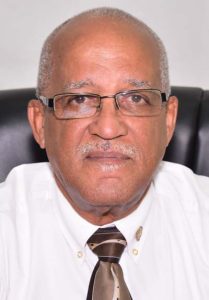 Veteran broadcaster Ron Robinson, who is a household name in Guyana, has been removed from his acting position as the state-owned TV network’s programme manager after failing two rounds of probations, which ended December 31, 2016.

“I feel that I have been unjustly treated by the Board, and it has to be based on the advice of the CEO,” Robinson told Demerara Waves Online News when asked what could have been the reason behind his removal.

Robinson said he was placed on probation after his appointment, but in September 2016 he received a letter from the Board saying his probation period would be extended until the end of December.  The letter did not give reason for the extension.

He received yet another letter at the end of December last saying he was not confirmed and that his post as Programme Manager would come to an end in January 2017. Again, no reason was given for the non-confirmation, according to Robinson.

“The CEO is micromanaging in my opinion,” Robinson commented, “he is a micro-manager and he brutally dictates to everyone how they should do their job.”

“For example,” he continued, “the Natasha Smith issue, which was badly handled in my opinion.” NCN had come under fire for removing pregnant news anchor, Natasha Smith, from the anchor seat because of changes in her body due to her pregnancy. The decision was linked to Cornette.

NCN’s CEO Lennox Cornette confirmed with Demerara Waves Online today that Robinson had first been placed as acting Programme Manager but it was later recommended he be removed.

Discussions are yet to be held by NCN’s Board of Directors which could see Robinson retained as a training consultant, but Cornette said the company is open to such a decision.

Cornette did not comment on the specifics except saying the decision to retain Robinson would be the Board’s decision.

“I don’t know if I can accept and be treated the same way by the CEO,” Robinson said on the idea of being accepted as a training consultant at NCN.

When asked what could have created the bad blood between himself and the NCN CEO, Robinson responded, “I want to believe it is my relationship with Terry Holder.”

Cornette had been accused, following his appointment last year, of forging the signature, in 1999, of the Guyana Telephone and Telegraph Company’s (GTT) Deputy General Manager, Terry Holder, while working with GTT.

NCN Director Imran Khan had resigned from the state entity soon after the Board last year confirmed the appointment of Cornette as CEO in light of the claims against him.

NCN’s management only May last year announced Robinson would assume the programme manager post. “Based on the current revitalization process underway at NCN, Robinson emerged the most suitable candidate following a shortlist and interview process conducted by members of the board and a professional HR consultant,” NCN had said.

The state-owned entity boasted Robinson brought to the network more than 40 years of media experience, and a wealth of knowledge in Guyana’s broadcast arena.