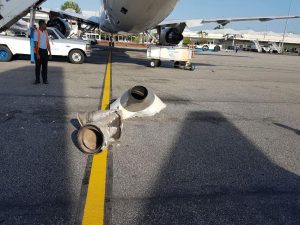 Authorities in several countries are probing a recent accident at the Cheddi Jagan International Airport (CJIA) in which a Caribbean Airlines plane ripped off the tail cone of a Fly Jamaica plane.

Director General of the Guyana Civil Aviation Authority (GCAA), Egbert Field said the relevant authorities in Guyana, Trinidad and Tobago, Jamaica and the United States (US) were probing the incident that occurred on November 29, 2016.

That’s because the incident occurred in Guyana, Caribbean Airlines is registered and based in Trinidad, and Fly Jamaica is based in Jamaica and registered in the US.

Field could not say when the “detailed” probe, which is being led by Guyana, would be completed. “The investigation will take a little longer because we have designated investigators from those other countries also that are invited by our accident investigation group,” he told a news conference.

The GCAA boss said a preliminary report would eventually be dispatched to the Minister responsible for Aviation, David Patterson.

The incident occurred at about 7:40 AM when the CAL flight, BW 527, was coming  in from New York, while the Fly Jamaica plane was being prepared for boarding.

Guyana’s Accident Investigation Group has been removed from the GCAA and reports directly to the Minister responsible for Aviation in keeping with recommendations by the International Civil Aviation Organisation (ICAO) worldwide. “This is to prevent any incestuous relationship” such as the GCAA investigating itself.

GCAA  is, however, provides support to Accident Investigation Group  by seconding investigators whenever necessary.