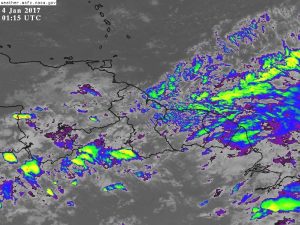 Residents living along the coast in Regions Two to Six are being encouraged to take precautions against flooding as a result of unusually heavy rainfall predicted in the coming week, the Government Information Agency (GINA) reported.

Deputy Hydrometeorological Officer, Dr. Garvin Cummings from the Ministry of Agriculture told the Government Information Agency (GINA) today, that rainfall quantities are expected to be two to four inches within a 24- hour period, up until Friday.

“These conditions are highly likely to bring flooding to flood prone areas along the coast,” Cummings said. The National Weather Watch Centre issued a weather warning today, following the development of an upper–level trough and a sub–tropical jet.

“(This) basically means we’re having all of the moisture coming from the north given that it is winter combined with upper level winds that are generating the rainfall that we are seeing right now,” Cummings explained.

January marks the beginning of the secondary rainy season for Guyana and Dr. Cummings said that above average rainfall is expected. Dr. Cummings explained that this forecast is being influenced by La Nina conditions.

“We’re having a weak influence of La Nina which means for Guyana increased quantities of rainfall. We are expecting periods of significant amount of rainfall until the end of the season,” Cummings pointed out.

The rainy season is expected to conclude in February or latest in early March.