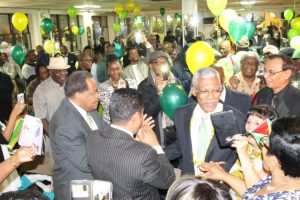 Despite President David Granger’s assurances that he has not distanced himself from the grassroots in favour of the elite, a number of New York-based Guyanese has slammed him for ignoring their pleas to be recognised and involved in the decision-making process.

Convenor of the groups, Professor Asquith Rose on Sunday (November, 27, 2016) released a letter to President David Granger dated October 11, 2016 in which he said Guyanese have begun dissociating themselves from the APNU+AFC coalition. “Many have resented your actions/attitude and have opted to no longer align or associate with the coalition,” said Rose.

“Furthermore, members of the various groups felt that your callous action not to respond to the Resolution shows that you have remained insensitive to their desire to address their needs. Ignoring the Resolution is both insulting and arrogant and could have far-reaching consequences,” he said.

Granger did not attend the APNU+AFC victory parade and rally that was held in New York last year or the Independence Day parade in New York.

While the latest missive to the Guyanese leader was signed only by Rose, a previous statement named prominent attorneys at law, Colin Moore and Derrick Arjune; businesswoman Guiliana Jacobs; former Chairman of the AFC defunct Queens organization, Charles Sugrim; Vice Chair, Leyland Roopnarine and Secretary, Sase Singh; Pastor Jean Banmattie; several former members of the YSM including Eustace Hall and Michael Aarons; and members of the North American Region and PNCR groups in Brooklyn as attendees at a meeting that was held on September 24, 2016.

President Granger at the weekend dismissed as “erroneous” claims that he has become elitist and does not meet with the grassroots Guyanese Diaspora in Brooklyn and Queens who helped raise funds and campaigned to elect him at the May 11, 2015 general and regional elections. Granger referred to an invitation-only State Dinner held at Sheraton Hotel in Manhattan in June as an example of meeting with New York-based Guyanese.

Granger on Saturday also said the law does not provide for a member of someone from the Diaspora to be a member of parliament. In relation to the establishment of a mechanism to involve the Diaspora, the President said a Department of the Diaspora has been set up at the Ministry of Foreign Affairs.

Touching on the appointment of several Ambassadors, the New York-based Guyanese told the President in a resolution that those appointees are “unknown to members of the Diaspora” who are political appointees. “For him to say that diplomats are appointed based on merit and not by affiliation to a political party is further from the truth. Nearly all the diplomats appointed by the government are affiliated to one party or another. Treating members of the Diaspora in such a callous and unfair manner has made it extremely difficult for them to continue their support of the government,” he said.

Despite their announcement that some Guyanese have already broke away or distanced themselves from the ANPU+AFC coalition-led administration, they held out some hope if intermediaries or direct contacts could be established with the President. “.Therefore, it should be in the interest of both parties to agree to have two liaison officers with direct contacts with the Head of State or any of his designees. The liaison officers must be recommended and accepted by the groups in the Diaspora. The members of the Diaspora believe that is important for accurate reporting of the progress being made in the country,” states the resolution.

The New York-based Guyanese groups said they have played a pivotal and integral role in electing the Coalition government to office, but  they have not been recognized or rewarded. “Many are disappointed of the ingratitude shown to them by the leaders of the government. Members of the Diaspora are willing to offer assistance, technical or otherwise to help in the development of the country, but they are unable to do so because of the failure of the President to uphold his promises to them.”