Now that Public Health Minister Dr George Norton is expected to come before the National Assembly’s Privilege’s Committee for misguiding the House on the $12.5M monthly drug bond, if the political opposition has its way, Public Infrastructure Minister David Patterson might suffer a similar fate for the D’Urban Park fiasco.

There are still unanswered questions about the D’Urban Jubilee Park initially built by Homestretch Development Inc, a private company, but later taken over by the Public Infrastructure Minister at a possible tune of $1B, according to Opposition Leader Jagdeo.

Revelations of the project were made in the National Assembly Monday following a parliamentary motion from Opposition MP Juan Edghill, who demanded government come clean on the financial arrangements surrounding D’Urban Park.

Edghill has since been summoned before the Parliament’s disciplinary body in connection with allegedly misleading the House in debating another motion that he had sponsored, a move the opposition People’s Progressive Party Civic (PPPC) has labelled “revenge” for the decision for Norton to make a similar appearance.

In the National Assembly, while Minister Patterson was not slated to speak on the already padded speakers’ list, but after the opposition added some pressure, Dr Rupert Roopnaraine- initially on the list- traded out speaking time for Patterson. 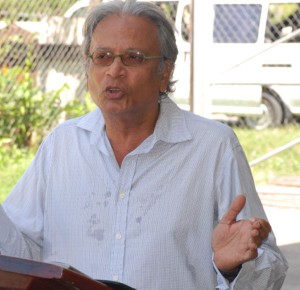 Dr Roopnaraine was later named as a Board Director for Homestretch Development Inc, the private company registered in January 2016 which started work in November 2015 a few months after the David Granger administration came into office.

Opposition Leader Jagdeo said at his press conference the state has a responsibility to provide information on the work of the company since that work was done on lands owned by the State.

Jagdeo is interested in knowing the arrangements between the state at the private company. “But are we saying in this era, it’s ok for ministers to be on private companies and don’t have to account for it,” Jagdeo questioned.

“[Minister] Rupert sat in parliament and never said a word and [Minister] Patterson never said his name,” Jagdeo told the press corps. “Patterson was trying to mislead the country again.”

Asked whether this government’s use of a special purpose company for the D’Urban Park could be compared to the former PPP government’s use of Atlantic Hotel Inc (AHI) for the Marriott Hotel, Jagdeo responded there was no denial that AHI was State owned.

He questioned Minister Patterson’s rationale for saying in the National Assembly that the company doing the work on D’Urban Park was a private company, but later revealing that government has an interest in the company.