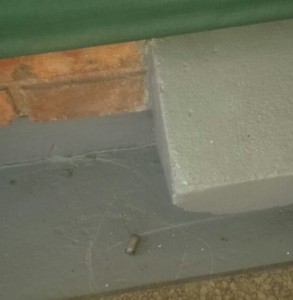 A spent shell at the scene of the shooting at Hand-in-Hand Trust, Middle Street, Georgetown.

A security guard at Hand-in-Hand Trust was shot and injured during an attempted robbery on the business premises located on Middle Street, Georgetown.

A foreign exchange cambio operates out of that location.

‘A’ Division Commander, Assistant Commissioner Clifton Hicken said the driver of a car that was allegedly used in the robbery was arrested on Mandela Avenue. The vehicle has been lodged.

The police officer said no firearm was located.

Hicken said investigators made efforts to contact the owner of the car who lives in Agricola, Greater Georgetown, East Bank Demerara but were not immediately successful.

An official of the company said two bandits entered the premises and there was a scuffle near the door.  The official said shots were fired and one of the bullets ricocheted and struck a female guard to her leg.

A spent shell was seen by eyewitnesses.

A 32 year old female security guard attached to the Hand-in-Hand Trust on Middle Street, Georgetown, is presently a patient at the GPHC after being shot in her right foot by one of two armed suspects, during a foiled robbery, about 1400h. today at Hand-in-Hand Trust.

Enquiries disclosed that the two suspects were observed entering the building and in the process trying to conceal their identities by placing pieces of cloth over their face.
The victim and her Supervisor who was armed with a handgun approached the suspects who discharged a round at the female guard hitting her below her ankle. Her supervisor returned fire and missed the suspects but managed to grab onto one of them and a scuffle ensued; during which process, the suspect snub-nosed revolver with five matching rounds fell and retrieved by the supervisor. The suspects then escaped and entered a waiting motor car which was parked a short distance away.
Based on police intelligence, the car was located in East La Penitence and its driver of West Ruimveldt, was taken into custody.