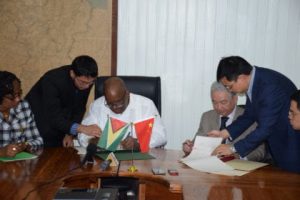 Minister of Finance, Winston Jordan, and outgoing Ambassador of the People’s Republic of China, Zhang Limin signing the Framework Agreement for the East Coast Road expansion at the Ministry of Finance

Minister of Finance, Winston Jordan, and outgoing Ambassador of the People’s Republic of China, Zhang Limin on Wednesday signed a Framework Agreement for a concessional loan from the Exim Bank of China for the widening of the East Coast Demerara road.

Minister Jordan noted that under the agreement, the Chinese Government will provide a loan of US$45.5M to facilitate the widening of and improvement of the East Coast thoroughfare.

The project will entail the widening of a section of the main road between Better Hope and Belfield, and will link numerous highly populated villages to Georgetown. Some of the immediate benefits to be accrued from this intervention include reduced travel time, traffic congestion, vehicular maintenance and accidents, Minister Jordan explained.

The project is also expected to enhance local and inter-regional trade since a significant part of Guyana’s economic activities rely on this thoroughfare.

Additionally, the Minister pointed out that the agreement is yet another demonstration of the strong bilateral relations existing between the Governments and peoples of Guyana and Chinaover several decades.

“Some examples of China’s economic cooperation in Guyana where concessional loans have been provided are the Guyana Power and Light (GPL) Transmission and Distribution Infrastructure Development Project, the E-Government Project and the Cheddi Jagan International Airport Expansion Project which is on-going,” Minister Jordan said.

The Minister noted that other interventions provided by grants from China include “the One Laptop per Teacher Project, acquisition of ferry vessels, design and construction and equipping of the Arthur Chung Conference Centre among others.”

“The Government of Guyana therefore counts on the Government of China to facilitate an early signing of the loan agreement, as this would allow for the speedy implementation of the project like the singing of the Framework Agreement for the Cheddi International Airport Extension Project back in October 31, 2012 after which the signing of the loan agreement was done on November 12, 2012,” Minister Jordan said.

Guyana has contributed $2.7B towards the project. Works including sand filling and removal of utilities are ongoing. This would ensure that the project will not be delayed like the West Coast Expansion Project and the East Bank Demerara Road Improvement project.

Ambassador Zhang Limin said the project is a good initiative to improve infrastructure in Guyana. Ambassador Limin gave the assurance that the Chinese Government is willing to assist in other projects.

The outgoing ambassador noted that his successor is capable of executing his roles effectively to better the relationship between the two countries.

2016-11-23
Denis Chabrol
Previous: Public Service College launched on advice of Commission of Inquiry
Next: Cult scandal, the Church and Deliverance