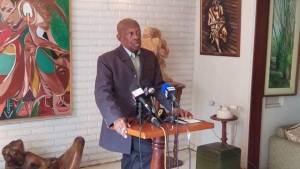 Despite the positions of the Guyana Human Rights Association, and the Transparency Institute of Guyana, former Prime Minister and former Georgetown Mayor Hamilton Green believes these bodies are attempting to create confusion as it relates to his proposed over-one million dollar monthly former Prime Minister’s pension.

Green accused the human rights body of “fomenting strife” and “distorting history” since that body mounted position that as Guyana’s Prime Minister between 1985-1990, Green presided over a “ethnically polarised” society.
“As a young and ruthless politician in the early 1960s his name figured prominently in the violence from which this society has still to recover”, the human rights body said of Green’s political leadership.
“In every civilised country I know, there are positions made for pensions and special benefits for former presidents and prime ministers. This is a universal application and there is nothing unique about it,” Green said today at a press conference defending his proposed at his Durban Backlands residence.
“Let them bring the evidence,” Green said. “This kind of statement is mere propaganda being regurgitated by people, I don’t know who they are…These what I call social mavericks,” he added.
The Transparency Institute of Guyana said in its statement against Green’s pension that “this bill for Mr. Green is vulgar, politically partisan and it reeks of cronyism. It appears that the PNC (People’s National Congress) faction of the coalition government is seeking to financially take care of one of its own former strongmen through the public purse,” a claim that Green called “completely irrelvant.”
That body, linked to a global movement of government watchdog groups, said Green’s proposed pension reeks of cronyism as an attempt to repay the former Georgetown Mayor for his services in electing the coalition government.
Green called the body’s position “completely irrelevant.” “Those statements are easy to make, and part of a cycle of people who want to paint confusion and not deal with reality.”
While Prime Minister Moses Nagamootoo expressed concern during his party’s press conference that the bill specifically references Green as a one-time provision, Green said he agrees with PM Nagamootoo’s position. He added that the amount of pension, benefits  and facilities is “not extravagant.”
For his part, Green believes Prime Ministerial pensions should be a usual expense on the Treasury. This position, however, does not sit well with the opposition People’s Progressive Party (PPP) whose leader, Bharrat Jagdeo, said the Prime Minister in Guyana is neither head of state nor head of government.
The opposition leader recently called for the government to make a solid case for Green’s pension bill.
Finance Minister Winston Jordan will table Green’s proposed pension bill today.