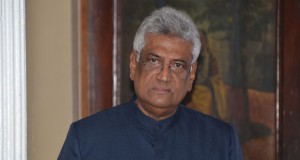 The opposition People’s Progressive Party (PPP) says Chairman of the Guyana Elections Commission (GECOM), Dr. Steve Surujbally will be stepping down this month-end.

“Dr. Steve Surujbally, the Chairman of Guyana’s Elections Commission (GECOM), has formally indicated to the Leader of the Opposition, Hon. Bharrat Jagdeo, M.P., that he shall be resigning from that office with effect on November 30th, 2016,” Opposition Chief Whip, Gail Teixeira said in a letter dated November 15 to Minister of State, Joseph Harmon.

Surujbally has shied away from disclosing specifically when he would be ending his 15-year long tenure as head of the elections management authority. He has said that he intends to leave office long before the first quarter of next year. He has said President David Granger wants a smooth transition to a new GECOM Chairman.

Writing to Harmon on behalf of Opposition Leader Bharrat Jagdeo, Teixeira wants to know what approach President Granger intends to take in filling the vacancy as provided for in Article 161 of the Guyana Constitution.

Teixeira said the Opposition Leader wants to know whether the President will formally write to him inviting him to submit his six nominees as required by Article 161 or whether the President will initiate a preliminary formal meeting with him to discuss the appointment of a new GECOM Chairman in accordance with the letter and spirit of Article 161 of the Constitution of Guyana.

The appointment of a GECOM Chairman and six commissioners is done in keeping with a formula that had been proposed by former United States President, Jimmy Carter of the Carter Center.

The Carter Center had played a pivotal role in 1990 in bringing about key electoral reforms, including counting of votes at the place of poll, in response to an intensive local and international campaign by the PPP then in opposition.