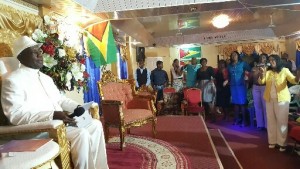 Embattled by a sex scandal with several women that was made public through the release of videos and pictures on Social Media one week ago, Pope Emmanuel “Philbert London said repeatedly “I’m sorry” for what has happened.

“I am here to tell you from the depths of my heart that I am sorry for anything, sorrow, embarrassment or shame that many would have experienced and in may cases  are still experiencing as a result of what has happened,” he told a congregation of about 100 persons, including numerous children, at Beacon Ministries Inc.

He called on followers to forgive him. “I want to say how sorry I am for this disappointment, hurt and anguish you felt and I hope that you will find it within your heart to forgive me and allow me to be your Father.”

In response, the congregants said in a chorus “We forgive you, we forgive you Papa,” “all the time,” “you taught us well,” and “we love you.” After  London finished his presentation and Bishop Guy Griffith called on members to say “You are forgiven Dad,” they repeated the words and then erupted into a frenzy.

A seemingly penitent Pope Emmanuel  said he felt like dying and in  fact spiritually he is dead as a result of what has happened. “I can’t wish an experience like this on my worst enemy.” London advised the two or three other persons who have stored “personal or highly sensitive material” to take note and ensure that it does not happen on us.

Attorney at Law Excellence Dazzell also known as Oceia Parris expressed her love and appreciation for Papa. She recalled his support for her during her studies to become a lawyer. Among the support she was offered was the provision of a laptop and the purchase of her gown.

“I am sorry if I ever communicated to you by word or action that I could not fail in morality or social ethics or standing. If I did that, I am so sorry I made you feel that way,” he added.

To those who were party to the fiasco and thought that it was of God, he said “I have no option but to forgive them.” He also forgave and blessed all those who were involved in acquiring and broadcasting the material in which he is seen prominently having intimate encounters with, in at least one instance, with two women at the same time that “caused so much pain.”

London blessed those “who were involved in ridicule and slander” because they don’t know better.

Before, his arrival a female church member led the congregants in singing a number of songs and then she stopped, saying that she was listening for a message from the Lord. That message turned out to be “Laugh” because this is the week of happiness, and then everyone burst out into sustained laughter.