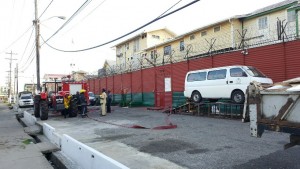 Joint Services personnel outside the Georegetown Prison while their colleagues conduct a search inside as part of an operation in response to credible information about a domestic security threat.

After a search of the Georgetown Prison that last several hours, no guns were found in what is considered one of Guyana’s maximum security jails.

Police and soldiers early Saturday morning raised the jail, as part of an operation to deal with potential domestic security threat. Sources said law enforcement authorities have received credible information of a planned jail break and that prisoners might be in possession of firearms.

Commander of ‘A’ Division, Assistant Commissioner, Clifton Hicken said no firearms were found, but cellular phones, narcotics and improvised weapons were discovered.

No one has been arrested.

Back in 2002, five dangerous criminals attacked prison wardens, snatched a handgun and shot a female prison officer before exiting the penitentiary and spawning heavily armed gangs that had established themselves in Buxton, East Coast Demerara.  There, they staged murders, kidnappings and robberies until the gangs were eventually dismantled in 2008.

The area of cordon around the jail was extended and barriers were being manned by soldiers armed with rifles.

Fire fighters were also deployed outside the Camp Street entrance of the jail where 17 inmates were burnt to death several months ago in Guyana’s worst prison riot.

The Ministry of the Presidency on Friday said the operation by police and soldiers was also aimed at addressing increased criminal activities.

On average, two businesses are knowingly robbed on a daily basis, but it is believed that many are unknown by the media because police say nothing.