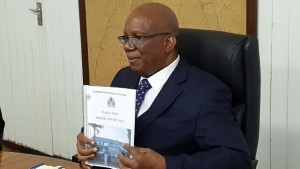 Minister of Finance, Winston Jordan showing off a copy of the Public Debt Management Report.

The presentation of the 2015 Annual Public Debt Report, by Minister of Finance Winston Jordan before the National Assembly on Friday, revealed that Guyana’s total public debt at the end of December 2015 was GYD$317.7Billion.

Addressing the National Assembly, Minister Jordan stated that the APNU+AFC government, will in 2017, be working to modernise the Consolidated Debt Management Act as part of efforts to improve the capacity to manage debt.

The Government Information Agency (GINA) said the report, which is the first of its kind, was described by the Finance Minister as an example of “the deserved and prominent place which debt-related issues have been given in the government’s strategic agenda for the development of Guyana.” He added that government is, “committed to continuing to invest in a consistent capacity building plan to develop the skill set necessary in understanding public debt management, and implementing a comprehensive debt strategy.”

He proffered that there are at least six main areas where Guyana hopes to improve its debt management capacity; institutional and legal frameworks, debt strategy formulation, self-assessment, and operational risk management and debt negotiations.

According to the report, Guyana owed $317.7 billion in public debt as of December 31, 2015. This was the lowest level in the preceding five years.

The $317.7 billion also reflects a decrease of 3.6 percent compared to its 2014 level. Minister Jordan explained that this decrease was largely due to repayments of the oil debt under the Guyana-Venezuela Rice Trade Arrangement. At present, he said, Guyana’s debt profile continues to remain stable and sustainable over the medium-term. The challenge, he further added, is to maintain debt sustainability in a volatile and uncertain global economy.

“In 2015, Guyana’s economy, perhaps for the first time in recent history, found itself in a precarious situation where most of the country’s key agricultural commodities, including sugar, rice, and forestry, faced headwinds. The slowdown in the global economy, combined with the loss of preferential markets, negatively affected demand for these produce.”

The Minister also put to the House that, “Even remittances, on which so many of our people depend, were a victim of the slowdown in the world economy. It is obvious that our excessive reliance on these sources of foreign exchange will continue to expose the economy to volatile external developments, and make us more susceptible to external shocks.”

Jordan also noted that a recent Debt Sustainability Analysis shows that the economy will remain vulnerable to external shocks, “with commodity price fluctuations having added to the volatility of our export earnings and tax revenues, and having also affected the financial performance of state-owned agricultural enterprises.”

It was explained that borrowing has also become more uncertain, with the recent increases in Guyana’s income. These increases have seen Guyana being classified as a lower middle-income country by the World Bank. As a consequence, there has been a reduction in the availability of concessional funding since these “softer terms are generally confined to low-income countries, an income-classification for which Guyana no longer qualifies.”

To counter this possibility, Guyana has to access affordable financing, the minister emphasized. “Guyana has sought alternative funding sources, especially from our South-South partners such as EXIM Bank of China, EXIM Bank of India, the Mexican Agency for International Cooperation and Development, and the Islamic Development Bank. At the same time, the country has maintained close ties with the multilateral agencies, including the World Bank, Inter-American Development Bank (IDB) and Caribbean Development Bank (CDB), and more traditional western bilateral donors.”

In closing, Minister Jordan cited the need for a policy imperative for the strengthening of the institutional framework for public debt management, including establishing a sound and modernised legal framework for debt management. He added that these developments “have made Guyana’s debt portfolio and the risks associated with it more complex.”