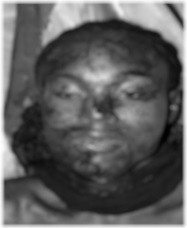 Police have identified the bandit who was shot dead by a licensed firearm holder at Diamond, East Bank Demerara.

He is Elijah De Florimonte of Middle Road, La Penitence. He had given authorities his occupation as a contractor.

De Florimonte’s body was identified by someone who knew him well, hours after the Guyana Police Force released a bloodied picture in an effort to seek the public’s help.

Police said a 38-year old miner opened fire at two bandits at about 2:15 Wednesday morning as they were attempting to gain entry through a southern door on the lower flat of his house.

The miner told investigators that he was awoken by a loud noise and when he saw them he raised an alarm and at the same time opened fire on the thieves, one of whom was armed with a handgun.  “He made an alarm and during this process, discharged his firearm in the bandits’ direction, hitting one of them who fell, whilst his accomplice with the firearm managed to scale the fenced yard and escaped,” police said.

The man, who was clad in a ¾ pants and a black vest tied around his neck, was pronounced dead on arrival at the Diamond Diagnostic Centre, East Bank Demerara.

2016-11-03
Denis Chabrol
Previous: Harmon, Nandlall differ on whether Duncan is still in legal hotwater
Next: Granger gives President’s College $1M for development of science and technology