Govt scaling back legal, illegal guns off the streets- Granger 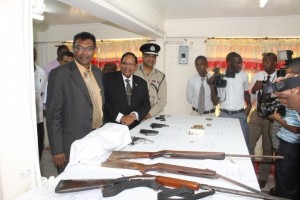 President David Granger on Wednesday said  he wants the number of illegal and legal guns to be drastically reduced, leaving firearms mainly in the hands of police and soldiers.

“The Minister of Public Security and I are reducing the frequency or the ease or controlling the ease with which some people can get weapons,” he said on this week’s edition of the television programme, “Public Interest.”

The President said a corps of wardens, with law enforcement powers, would soon be recruited and deployed in gold and timber producing areas as well as tourism sites where they would also help detect persons with illegal firearms and “bring those people to justice.”

Granger warned that licensed firearm holders, who misuse their guns, would have their weapons seized with the very slim chance of them being re-issued with a new licence. “Once your weapon is used in any illegality it will be seized and you might find it very, very difficult to get another licence,” he said.

The Guyanese leader said he has been advised that there have been instances in which licensed firearm holders ‘rent’ their guns to bandits in exchange for some of the proceeds of crime.

The Guyana Police Force has the capacity to identify weapons from which bullets have been fired by testing the spent shells and matching them with those they have saved from weapons at the time of purchasing and licensing.

The President said stricter border controls through the use of mounted police, heightened border patrols and the deployment of drones would be used to curb the inflow of illegal guns from countries like Brazil with which Guyana shares a 1,100 kilometre long border. “There is a plethora of measures which will be implemented and our whole policy is aimed at getting guns off of the street and thus leaving guns in the hands of the police and the army,” he said.

Brazil is one of the world’s largest producers and  exporters of small arms some of which have been seized in Guyana.

Public Security Minister Ramjattan has already said that steps are being taken to re-assess licensed firearm holders to ensure they are still eligible for gun permits. They are renewed every calendar year.

2016-11-03
Denis Chabrol
Previous: Closure of some GuySuco operations among options being considered
Next: Overhaul of civil aviation sector plan approved