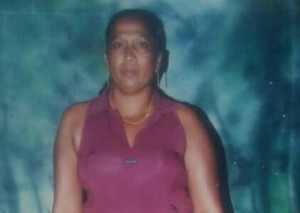 Police in Berbice said they are probing the “brutal murder” of a woman by her neighbour,  who is believed to be mentally unstable, at Belvedere, Corentyne, Berbice Wednesday morning.

Dead is 53-year old  Bhumattie Delall of 351 5th Street South Belvedere, Corentyne, Berbice who was attacked while she was standing in her yard. “The suspect armed with a cutlass, approached and dealt her several chops to her neck, almost severing same after which he left and went home.”

Investigators have since taken the prime suspect, a 39-year old labourer, into custody. “He was promptly arrested by investigators, to whom he handed over the alleged murder weapon,” the Guyana Police Force said in a statement.

Divisional Commander, Superintendent K. Adonis told Demerara Waves Online News that relatives and neighbours of the suspect believed that he is mentally unstable. 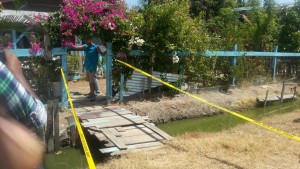 Ironically, Delall would often calm down the suspect whenever he misbehaves. However, today he went across to her yard and called for her. When she emerged, he began chopping her about her body.

One of the woman’s relatives grabbed her child and scaled a fence to escape the berserk man.

Although the assailant is regarded as mentally ill, his family members and relatives did not have any document to prove that he had received medical treatment, police said.