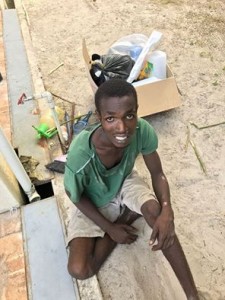 The man who was caught in the Bel Air residence of the daughter of prominent Attorney-at-Law, Andrew Pollard.

A labourer, who claimed he was feeding thirsty pit-bulls, was remanded to prison for breaking and entering and larceny.

The 26-year-old pleaded guilty and offered an explanation to Chief Magistrate Ann McLennan.

According to the facts by Police Prosecutor Neville Jeffers, on the day in question, Singh was in the upper flat of her home having a shower, when she was alerted by her barking dogs. The woman then looked through her bathroom door and saw her bedroom door open and suddenly shut. She then stepped out of the bathroom and made checks around the lower flat of her house. There she saw the defendant leaving the yard with the suitcase. The articles were inside. The court heard that Singh raised an alarm and the defendant dropped the suitcase and ran. He was soon caught by public spirited persons and handed over to police, and an investigation was carried out.

In his explanation, Alleyne told the magistrate that he went into yard to feed the thirsty pit bulls.

In response to this, the magistrate asked him how he knew the pit bulls were thirsty, to which he responded that he knew.

Magistrate then questioned him on whether he knows Singh, and after he responded in the negative, she asked why he would go into a yard to feed such dogs without knowing the persons living there. The accused continued to insist that the dogs were thirsty and he had to give them water. He explained further that after he’d given them the water, the pit bulls rushed him and bit him. “Me ain’t trouble nobody thing…I feel guilty to myself cause I don’t understand why the pit bulls was thirsty,” he said.

A not guilty plea was entered based on his explanation and he was remanded to prison til December 7, 2016

2016-11-02
Denis Chabrol
Previous: Former BK International clerk charged with embezzlement
Next: Use of date-rape drugs on the rise; “When you go out, do not take drinks from people…” DPP warns