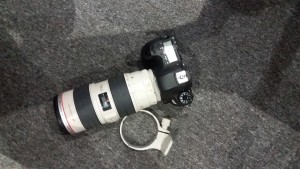 Keno George’s camera that was stolen and subsequently returned by two men allegedly in exchange for GYD$50,000.

Police alleged that Jevon Patterson and Romel Guttery on October 19, 2016 at Camp St. Georgetown, corruptly obtained GYD$50,000 from George, on account of helping him recover his stolen camera.

George, another photographer, Terrence Thompson, along with two models were on September 28, 2016 robbed at gun and knife-point and relieved of personal belongings valued at more than GYD$1.1M, on Hadfield Street, D’urban Backlands.

George, had told reporters that he on a photo-shoot with the two models about 4PM when two men approached them from behind-one with a gun, the other with a knife- and relieved them of their belongings.

Patterson and Guttery were granted bail by Magistrate Leron Daley and ordered to return to court on November 10, 2016 for statements.