Food import restrictions possible under WTO rules; “We are eating ourselves to death with the imported foods we eat”- FAO official 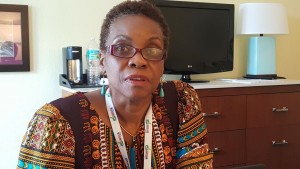 Caribbean Sub-regional Director of the Food and Agriculture Organisation (FAO), Dr. Lystra Fletcher-Paul says Caribbean nations should seriously consider restricting the importation of certain foods once they are in a position to produce healthier substitutes.

“I don’t think so at all. It’s high time. What we are waiting on is the information and we have to have a regular supply of that high-quality food,” she said.

Not only is the region spending US$4.75 billion annually on food imports, but according to the FAO official, Caribbean peoples are killing themselves with Non-Communicable Diseases (NCDs) such as diabetes, heart ailments and hypertension. “We are eating ourselves to death with the imported foods we eat.”

Lystra-Paul said once Caribbean nations can develop the capacities to produce and transport high quality foods such as roots and tubers, meat, vegetables and fruits, they should begin restricting the importation of certain foods. “The problem is quantity, quality and consistency in supply and that is why the foreign imports are killing us and that’s why the private sector finds it easier to just go to Miami and Puerto Rico and bring in tons of food because they are getting that supply so what we have to do is to get our act together down here,” she said.

The FAO official said there is room in global trade rules being administered by the World Trade Organisation (WTO) to allow for countries to impose restrictions on certain foods. She said one of the major challenges is the disconnect between officials of agriculture and foreign affairs ministries about the available leverage. “There are policy spaces within the WTO- do just that – put in the restrictions  but we need to know where there are. The problem is that a lot of the people who go to those  WTO negotiations are from the ministries of foreign affairs and they come back and they don’t share the information with the ministries of agriculture…so we need to share that information and break it down because a lot of that is ‘legal speak’ that is not in the language that the common man can understand,” said Fletcher-Paul.

Eight Caribbean Community nations, she said, have been making some progress in reducing the consumption of wheaten flour by up to 40 percent by using grated cassava and cassava flour instead. Supermarkets in Barbados, Grenada and Trinidad and Tobago now sell sliced bread made with 40 % cassava flour. The cassava market has now expanded to coffee shops and hotels where bread, muffins and other bakery products are sold; to feed suppliers (for livestock feed) and breweries (for beer).

She signaled that the wider Caribbean should follow the example of the sub-regional Organisation of Eastern Caribbean States where they have been able to develop a network of suppliers and shippers who often share information on via WhatsApp to satisfy demands across the island chain.

She recommended that clusters of hotels, restaurants, buyers and transportation providers should form part of clusters in each Caribbean country to stimulate production and demand.

Another significant constraint that the FAO sub-regional director pointed to was the fact that most Caribbean governments are today spending less than two percent of their annual budgets on agriculture compared to 20 percent more than a decade ago. She said the explanations being given by those countries is that they need to spend more on health, education and security.

“The explanation is that the priority right now in most of the countries is national security because of the high crime rate that is happening and health because you have a lot of people coming down with these chronic non-communicable diseases which is linked to the food that we are eating and education- they want to invest more in the young people and their minds because they are the future of the countries,” he said.

The FAO official told the opening of the Caribbean Week of Agriculture (CWA) in the Cayman Islands earlier this week that due to the aging population in agriculture, and high rate of youth unemployment in the region, “we are also been investing in youth in agriculture by a regional programme for US$2 million to enhance youth employment opportunities in agriculture and related areas.

With limited resources, she said the plight facing Caribbean countries must be taken into consideration, but at the same time she warned that the region would be worse off as a result of increased chronic NCDs. “If we don’t address it from the point of view of agriculture we will have a bigger problem down the road which is what I keep saying: The amount of monies that governments are spending to deal with the health issues now will get worse if we don’t deal with the problem by feeding ourselves properly,” she said.

She praised Guyana and Suriname for placing high priority on agriculture by teaching it as a subject at schools and also supplying locally produced food at events.

At the CWA being held from October 24 to 28, 2016, calls have been made for agriculture to be mainstreamed in the areas of health and tourism. Fletcher-Paul wants to see a more integrated and cross-sectoral approach to agriculture among various stakeholders. “All of our work in promoting investment in food and agriculture to eradicate hunger and food insecurity cannot be done alone – it must be done in partnership with governments, private sector, civil society, academia, farmers, fisherfolk, agro-processors and other development agencies.”