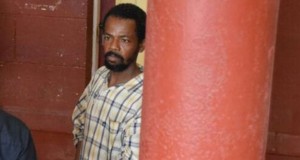 Mark Anthony Barclay, who had confessed to murdering Gordon Ross outside White Castle Fish Shop, has been granted bail and will soon be facing trial in the High Court for manslaughter.

Barclay had initially been on trial at the Georgetown Magistrates Court for murdering Ross. However, on Thursday, after the prosecution had closed the case, Chief Magistrate Ann McLennan changed the charge from murder to that of manslaughter.

Demerara Waves understands that on the night of the incident the accused, who is prone to stuttering, was provoked by the now dead man. As a result, the accused turned on Ross and stabbed him.

The magistrate said that after examining all the evidence put forth by the prosecution, the court has established a prima facie case against the accused. He is set to stand trial at the next criminal assizes sometime early next year.

When asked by the magistrate if he wished to say anything, the unrepresented man declined. Barclay was granted $200,000 bail and is required to report to the Ruimveldt Police Station every Friday at 8:30 AM pending the outcome of the matter. Madam warned him that failure to comply with the stipulation of the bail will result in him being reincarcerated.

Ross, called ‘Black Boy’ was found on John Street, Georgetown, around 1:30 AM on April 30 this year. He had stab wounds about his body, and was rushed by public-spirited persons to the Georgetown Public Hospital Cooperation. There he succumbed while receiving medical attention.

During the Preliminary Inquiry, Ronvis Skepmire (an acquaintance of the deceased) had testified on what he witnessed on April 29, 2016. Skepmire related that on the night of the incident, at around 22:00hrs, he was at the Fish Shop liming, when Ross came up to him with a knife in his hand. “He was bleeding. I asked him if he’s OK, but he didn’t respond. He (Ross) took two steps forward and fell (…and he) jumped up again and walked down John Street and fell,” the witness told the court. Skepmire continued that he went over to where the Virtual Complainant (VC) was lying, and discovered that his leg was bleeding. He said a staff from the fish shop handed him a piece of cloth, which he used to tie the bleeding man’s leg. The witness concluded that he and some other civilians hailed a cab and placed the VC in and he was taken to the hospital.