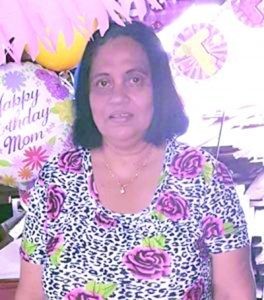 The two accused, in the murder of Mahaicony businesswoman Bibi Shairoon Nesha Ali, appeared at the Sparendaam Magistrate Court to answer to the charge.

It is alleged that between October 15 and 17, 2016, at Lot 4 Novar Mahaicony, Davanand Rampersaud and a 14-year-old accomplice murdered Ali, during the course of a robbery.

The two were not required to plead to the indictable charge when it was read to them by Magistrate Zamilla Ali Seepaul. The matter has been transferred to the Mahaicony Magistrate Court and will be called again on November 14, 2016.

Police today released a press statement refuting Kaieteur Newspaper’s claim that one of the accused in the murder was in jail when the businesswoman was slain.

The statement said, “The Force wishes to acknowledge that while it is true that the accused was indeed imprisoned at the time of the murder, he and the other accused whilst incarcerated “conspired” and “hatched” the plan to execute the crime, which he admitted under caution. Legal advice was sought and obtained, resulted in the institution of the joint capital charge.”

Police further stated that for the newspaper article to say that “police may have made a major blunder in their investigations,” is an incorrect statement. Nesha, also called “auntie shakeela”, was discovered dead in her home on the morning of October 17, 2016, with her mouth gagged and her hands bound.

She was lashed to her head with a frying pan.