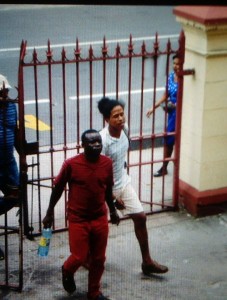 A seaman has been fined GYD$16 million together with four years in prison, after pleading guilty to possession of narcotics.

The allegation against Troy Van Doimen is that on October 22, at 51 Fifth Avenue Bartica, he had in his possession 14.61 kilogrammes of marijuana for the purpose of trafficking.

When his turn came for him to plead to the charge, the accused stated, “your worship I don’t want to waste the court’s time. I am pleading guilty. I never had any trouble with the law, and I’m pleading for a minimum.”

According to the prosecution’s facts, on the day in question, police acting on information received went to the defendant’s home. There they conducted a search in the defendant’s presence, where police found bags containing suspected leaves, seeds and stems under a chair.

The discovery was brought to the defendant’s attention, he was told of the offense and cautioned, at which point he admitted to ownership of the drugs. The court heard that ranks took possession of the narcotics, arrested the defendant and took him to the Bartica Police Station.

There the items were weighed and turned out to be 14kg 61 grams of cannabis, and the accused was charged accordingly.

When asked what he had to say for himself, Van Doimen said, “I’m asking please for a minimum…” Before handing down the sentence, Chief Magistrate Ann McLennan asked the 46-year-old how he got the marijuana, he responded that someone brought it and left it with him.

The magistrate then asked Police Prosecutor Neville Jeffers what was the market value of the narcotics. To this he prosecutor responded that it was $5,624,400, which when multiplied by 3 is GYD$16,873,200.

The sentence was then handed down.