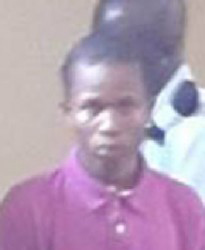 Although a city magistrate has found that there is sufficient evidence for a man to face trial by a High Court judge and jury, he insists that he is innocent.

Nicholas Hercules, called ‘Bucko’ was on Friday committed to stand trial in the High Court for the murder of his relative.

Following the lengthy Preliminary Inquiry into the matter, Magistrate Judy Latchman expressed her confidence that the prosecution has established a prima facie case against the accused.
When asked what, if anything, he had to say to the court, Hercules stated “I’m innocent of this charge”.
The matter will be called at the next criminal assizes sometime early next year.
The murder accused first appeared before Magistrate Fabayo Azore in April 2015 to hear her read the charge against him. It stated that on April 1, 2015 at Princes Street Georgetown, the then 19-year-old Hercules murdered 21-year-old Carlos Solomon, called ‘Roy’.

In relating the facts of the matter at the time, Police Corporal Simone Payne stated that Hercules and Solomon knew each other, since they resided at the same address. She continued that on the day in question, the defendant and Solomon were involved in an argument which soon spiraled out of control, and Hercules pulled out a knife and dealt Solomon a stab to his armpit.
Payne stated that Solomon succumbed to his injuries while he was being rushed to the Georgetown Public Hospital Corporation (GPHC).

The accused’s representative Attorney Lyndon Amsterdam had then pointed out that his client received several injuries to his right knee as a result of the incident. He’d argued that Solomon inflicted the injuries on his client with a knife.
Apr 08, 2015
The accused, Nicholas Hercules, 19, of 44 Princes Street, Georgetown, walked into the packed courtroom with his head bent. He was not required to enter a plea to the indictable offence.
Magistrate Fabayo Azore read the charge to him when he was arraigned before her yesterday at the Georgetown Magistrates’ Courts.

On the fateful date, Hercules, who is said to be the Virtual Complainant’s stepfather’s grandson, allegedly stabbed Solomon in the region of his heart. The accused was reportedly nabbed at the Alberttown Police Station, where he went to report the matter. However, police were forced to chase after the accused who sprinted from their clutches after learning of his relative’s demise.