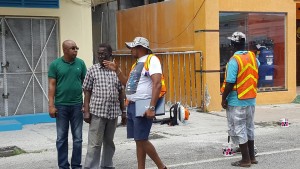 “Everything has been signed and the project is a ‘go’ so we’re essentially preparing for it,” he told Demerara Waves Online News on Main Street, Georgetown while workers were busy painting the areas for vehicles.

Cush did not want to say exactly when the parking meters would be installed, instead opting to say “within a few weeks.”

He reiterated that the rate would be GYD$50 for 15 minutes for Regent, Main, Water and other streets in the central business district.

“It will transform this country, it will modernize out city and it will generate tremendous amounts of revenues for the City of Georgetown to deliver the services that our elected representatives have been elected to deliver to the citizens of Georgetown,” he said.

Cush said initially City Hall would get 20 percent while Smart City Solutions would get 80 percent, as part of an agreement for the company’s US$10 million investment.

City Hall has repeatedly made out a case for the installation of parking meters as a major revenue generator to help keep clean the city of garbage, clogged drains and thickly vegetated overgrowth.