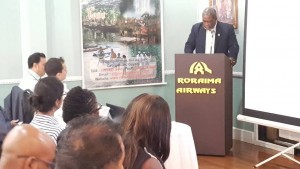 Former Chief-of-Staff of the Guyana Defence Force (GDF),  Retired Brigadier Mark Phillips Friday said although the official police statistics show a decline in serious crimes, the feeling of insecurity among Guyanese is very high makes it necessary for collaboration among several stakeholders.

“Notwithstanding the statistics that speak to a reduction in crime- and here I am not hitting at the police force- it is my firm belief, as a citizen of Guyana, that the high incidence of gun-related crimes is today the most pressing problem in our Guyanese society,” he told the opening of a security seminar and exposition by the Georgetown Chamber of Commerce and Industry (GCCI).

Phillips, who recently retired after 36 years of military service, noted that despite investments by the People’s Progressive Party Civic (PPPC) and A Partnership for National Unity+ Alliance For Change (APNU+AFC) administrations in improving security,  that “the high incidence of gun-related crimes is today the most pressing in our Guyanese society.”

“Everyday our citizens are exposed to more and more violent robberies at their places of business- be it shops, factories, delivery vehicles, rice fields, night clubs, churches and other places of worship and even in the sanctity of their homes. No one is safe from violent crimes and criminal activities in our urban and rural areas today. It’s just a matter of time when the criminals will attack any one of us,” he said.

Retired Brigadier Phillips, who ended his military career on October 5, 2016, recommended collaboration among private and public sector agencies, civil society and the media to collectively ensure the security and safety of Guyanese. He identified the promotion of Guyana’s development as one of the major reasons for collaboration.

With citizen security being defined as the capacity of the individuals and groups to exercise the political, economic, civil and human rights that make them citizens who live freely, peacefully and safely to participate fully in governance, the former Chief of Staff called for better protection from assault, murder, rape, robbery, theft, fraud, kidnapping, extortion and financial crimes.

The Guyana Police Force say it has recorded a 21/% decrease in serious crimes at the end of September, 2016, relative to the same period last year.  “The consistent and continuous reduction in all of the above listed serious crimes, is an indication that the strategies are working well, have yielded and will continue to yield positive results, thereby assuring all citizens that their collaborative effort in partnering with law enforcement is vital,” the police force said.

Assistant Commissioner of Police, Paul Williams expressed concern that members of the public refuse to cooperate with law enforcement agencies in providing surveillance footage to help identify perpetrators. “Today, we still face challenges in terms of going ahead and asking persons for footage for crime that was committed right within their domain and still we don’t have that cooperation. Sometimes, we receive excuses that we just have cameras but it is not recording,” he said.

Citing budgetary constraints in accessing the technologies, he called on the private security to share surveillance technology with law enforcement agencies to help curb serious crimes. He hoped that private security entities, the business community and the police would sign a memorandum of understanding to share information securely. The Assistant Commissioner offered the Guyana Police Force as a testing ground for new crime-fighting technologies that the private sector might import.