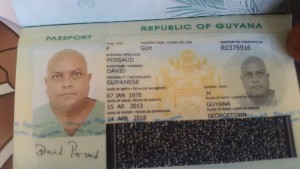 Passport found in possession of Barry Dataram in the name of David Persaud. (RD Productions photo)

“They tampered with the bio-data pages of both passports and put in false immigration stamps to show that they left Springlands,” he told Demerara Waves Online News.

Jessamy said no one at immigration was involved, although evidence was led in court that Dataram and Boodnarine conspired with others at Camp Street (the location of the Central Passport and Immigration Office) with intent to defraud forged passports numbered RO341097 (Boodnarine’s) and RO376916 (Dataram’s), purporting to show that they had been stamped at the Central Immigration and Passport Office. 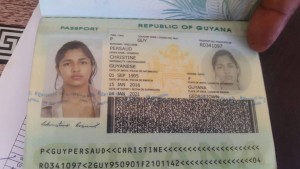 Passport found in possession of Anjanie Boodnarine in the name of Christine Persaud. (RD Productions photo)

The original holders of the passports are males although one was forged to reflect that it was issued to Christine Persaud. The other was issued to David Persaud.

Jessamy said the original holder of one of the passports has given a credible account, which is backed up by police reports, that his was stolen during a break-in of his motor 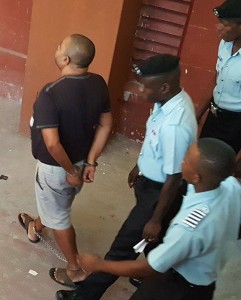 Barry Dataram leaving the courtroom for the lockups at the Georgetown Magistrates Court.

However, the Crime Chief said the other man, who is from La Bagatelle, Leguan, could not give investigators a credible explanation about how his passport was not in his possession.  He is still the subject of an ongoing probe. “His explanation has a lot of holes inside,” said Jessamy.

Dataram, who has been sentenced in absentia to five years imprisonment for cocaine trafficking, was Tuesday sentenced to additional years jail for passport forgery, absconding the law and leaving Guyana illegally.

Boodnarine has pleaded not guilty to similar charges and has been remanded to prison until October 21, 2016 when she will re-appear in court.

Dataram and Boodnarine left Guyana illegally and entered Suriname some time before September 27, 2016 when he was convicted on the cocaine charges. 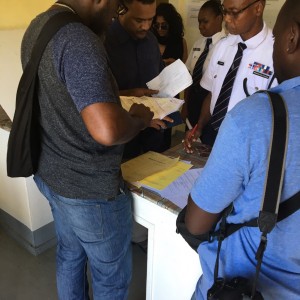 (Second from left) Head of Guyana’s Customs Anti-Narcotics Unit, James Singh and Guyanese and Surinamese immigration personnel at the handover of Barry Dataram and Anjanie Boodnarine at Port Moleson Creek, Corentyne River. In backrgound is Boodnarine.

They were caught last week Friday, October 14, 2016 at Latour, southern Paramaribo, Suriname and transferred to Guyana the following day.

Meanwhile, the Head of the Customs Anti-Narcotics Unit, James Singh and acting Police Commissioner, David Ramnarine have credited international cooperation with the arrest of the duo.

“You can outrun the law and this is a perfect example of inter-agency cooperation, both locally and regionally,” said Singh who also thanked the various agencies in Suriname that made the capture possible.

“The Acting Commissioner of Police wishes to acknowledge the excellent collaboration between local law enforcement units and our counterparts in Suriname…with the use of science and technology in law enforcement and personnel who are consummate professionals, the public interest is well served,” Ramnarine said.

Boodnarine and two men have been freed of the drug charge.