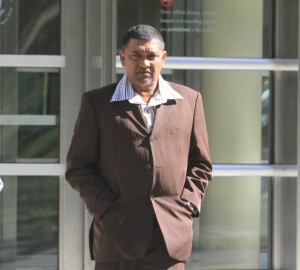 The owner of a company that imports fish from Guyana was convicted Friday in Brooklyn Federal Court of smuggling 250 kilos of cocaine in a frozen shrimp-laden shipping container.

Heeralall Sukdeo claimed he was duped by a relative who is in the fish business, too, and was left holding the bag after the feds found the bricks hidden inside blocks of ice.

“The defendant is a drug smuggler,” Assistant U.S. Attorney Ryan Harris told the jury, “and he was caught red handed.”

The cocaine, valued at over $8 million, was shipped from Georgetown, Guyana, and arrived at the Red Hook pier in June 2015.

The much larger shipping container apparently did not arouse Sukdeo’s suspicion when he flew in from Guyana to pick up the load.