Young woman accused of burning down house in Mahdia 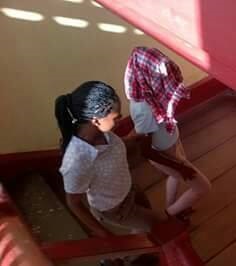 Naomi Williams concealing her identity as she left the courtroom.

A 25-year-old mother of one was on Thursday remanded to prison after she appeared before Magistrate Judy Latchman on $2.9M arson and property damage charges.

The Norton Street, Lodge resident pleaded not guilty to the charge when it was read to her by Magistrate Judy Latchman.

Prosecutor Vishnu Hunt objected to bail on the grounds of the quantum of the charges, the penalty attached, as well as the fact that the accused’s address is in Georgetown. Hunt said that since the case is to be transferred to the Mahdia Magistrate Court there is a likelihood that if the defendant is granted bail, she may not attend.

Hunt’s objection was duly noted by Latchman and Williams was remanded to prison until October 25, 2016 when she will be appearing before Chief Magistrate Ann Mc Lennan