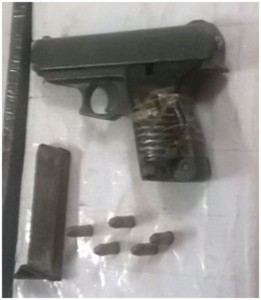 The pistol and ammunition that were allegedly found in the possession of a robbery suspect at Cuyuni/Mazaruni Region.

A resident of Linden, who is wanted for questioning for robbery under arms, was Tuesday morning arrested in Cuyuni allegedly with a gun and bullets, police said.

Investigators said the 35 year old male of Industrial Area, Mackenzie, Linden,  was nabbed at Cuyuni by with an unlicensed .32 pistol with five matching rounds.

The suspect who is wanted for questioning in connection with a report of robbery under arms, was seen by the police about 9 AM in “ Cumo Cumo”, Cuyuni/Mazaruni, and was promptly arrested and searched, when the firearm and ammunition were allegedly found in his possession.