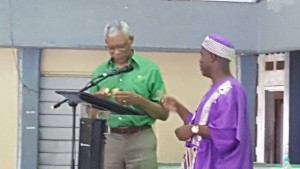 The Region Three Chairman of the People’s National Congress Reform (PNCR), Mark Walkes has for the first time publicly stated that he had opposed party leader David Granger, but the two men have one thing in common- they love their party’s founder leader, Forbes Burnham.

Walkes also promised to lodge formal complaints with the PNCR’s headquarters against certain persons who allegedly attempted to sabotage the awards ceremony.

Addressing a PNCR Region Three (West Demerara- Essequibo Islands) Award Ceremony on Saturday at the West Demerara Secondary School for party stalwarts, Walkes remarked in the presence of Granger at the head table that he respects rather than supports the Guyanese leader. . “I did not support Mr. David Granger; the world knows that but I never disrespect him and I don’t want anybody going out saying I disrespect Mr. Granger. I never did so,” he said.

Walkes and veteran party member, Aubrey Norton were part of a group that had supported Carl Greenidge, who was among the attendees at the awards ceremony, to become party leader in 2012. Referring to Norton as his mentor, Walkes said wherever Norton goes he would be following him.

Although Walkes confessed that he did not prefer Granger, he took the opportunity to present him with a pin as a token of appreciation by Region Three but he declined to pin it on the party leader. “I would not pin it on you because I don’t want to bore you,” he quipped.

Walkes said he was not only very happy and excited to have organised the award ceremony to honour the several party stalwarts but also to be his party’s Region Three Chairman. “As Chairman of this region, I am very happy and proud to be regional chairman of Linden Forbes Sampson Burnham party, then led by Hugh Desmond Hoyte and Robert Herman Orlando Corbin and now David Arthur Granger,”  he said.

In his address, President Granger spent almost all of his time on recognizing Burnham’s contributions to the founding of the 59-year old PNCR  and laying the social, economic and political groundwork for developing  a cohesive independent Guyana. “When the PNC was formed in 1957, our  Founder-Leader set out to put an end to the abuses of colonial society, the abuses of segregation and discrimination, the abuses of having one set of people poor and another set of people rich, the abuses of political division and our Founder Leader created a party of a new type,” said Granger, a historian.

Saying that he was well versed in politics because most of his colleagues are politicians, Walkes vowed to surmount challenges. “Those who are trying to fight me, comrades, they can’t make it; they can’t survive with me, comrades…so I will fight with them to keep Forbes Burnham’s party going in this region,” he said, adding that it was “not a buse out; there is a place for the buse out.”  He complained openly to the PNCR Leader that up to Saturday afternoon, two awardees had informed him that the awards ceremony had been called off. “I know the team who was going around doing it, comrades, and I will give the names to the leader and I will be looking forward to them being disciplined,” he said.

He vowed to ensure that there is an end to in-fighting in the PNCR. “I will not allow this party to be distracted by a group who does not have the party at heart,” said Walkes. The PNCR Leader did not react to any of the Region Three Chairman’s concerns, but thanked him for his invitation to the awards ceremony.

When it was time to present awards, Walkes ordered a reluctant President Granger to do so to the first batch of recipients. He also pointedly instructed the President to take up his position off stage to present the awards. “No, we want you. You are not running the show. I am running the show,” the Regional Chairman said to loud applause. “So I’ll ask you to step forward Comrade Leader. You have to listen to your children,” he added.

In the end, it appeared to have been the right approach because many of the elderly recipients would have been unable to climb the stairs to the go on stage. In fact, the President had to go directly to a number of the physically frail persons present the awards.