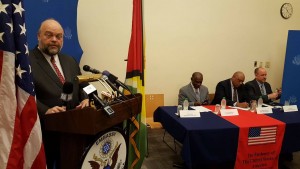 Although ExxonMobil says that oil production offshore Guyana is expected to directly employ less than 200 persons, United States (US) Ambassador, Perry Holloway says job creation will depend heavily on how this poor Western Hemisphere country spends its oil revenues.

“The real significant job creation will come about from the revenue generated from the oil find. The government, in consultation with other key stakeholders, will be able to decide n what sectors and projects the revenues are to be invested,” he said.

Making it clear that he was merely floating a number of ideas on how the oil cash can be spent wisely, the American envoy said projects could include hydropower and/or other forms of renewable energy, modernization of health care facilities to improve patient care and to attract and keep doctors in Guyana, better schools and universities as well as infrastructure projects such as a deep-water port and road to Lethem to increase trade with neighbouring Brazil.

With fears already being expressed that Guyana’s dollar (currently being traded at GYD$214.00 = US$1.00) could be revalued, exports would become uncompetitive on the international market and higher volumes of cheaper imports, and there would be less emphasis on other industries; the US Ambassador challenged Guyana to invest oil revenues in job-creation and reduced reliance on only a few sources  of economic wealth. “The best way to avoid the Dutch disease is to invest the oil revenues in Guyana’s economy in a way that creates jobs and diversifies the economy.

My point here is that in many ways, the Government and people of Guyana may have the best of both worlds –oil revenue and no limitations on where to guide job creation and growth,” he said at an event to launch a US$297,000 project that the US is funding to help improve transparency and accountability in the natural resources sector.

That will be done when Guyana joins the Extractive Industries Transparency Initiative (EITI) after preparatory assistance by the Carter Centre.