Jagdeo hints that PPP should have engaged in political unrest 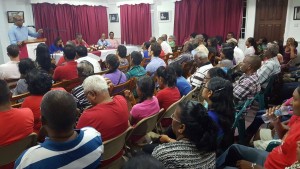 Opposition Leader, Bharrat Jagdeo (at lectern) addressing a gathering at a PPP-organised public forum to mark Guyana’s return to democracy on October 5, 1992 when the first free and fair general election in almost 30 years was held.

Opposition Leader, Bharrat Jagdeo Friday night hinted that the People’s Progressive Party Civic (PPPC) should have engaged in post-election unrest , maintaining that his party was rigged out of office at last year’s general elections.

“Many think that maybe the People’s Progressive Party acted too calmly too,” he said and added that “maybe our leaders who were making the decisions then should have acted differently because sometimes those things work and they get the international community involved,” he said.

In response to burning, looting and the beating up of perceived PPP supporters after the People’s National Congress Reform (PNCR) had lost elections in 1992, 1997 and 2006, the then government had complained to the international community and had sought the solidarity of the Organisation of American States (OAS).

He told a forum at Red House that if the People’s National Congress Reform’s (PNCR) request to the Guyana Elections Commission (GECOM) for a recount in Region Four had not been facilitated because the Returning Officer and her staff “disappeared” ,  and had lost power by just over  4,000 votes or a regional seat by one vote; Georgetown would have gone up in flames.

Jagdeo did not refer to the then President Donald Ramotar or any other senior PPP leader at that time, but said those in office then appeared not to have favoured political disruptions. “I guess people, who made the decision at that time, were guided by a different ethos, a different philosophy and so you had not an acceptance of the results but a decision to move on,” Jagdeo told a packed auditorium at the Red House-based Cheddi Jagan Research Centre, High Street, Kingston, Georgetown.

Then United States (US) Embassy Deputy Chief of Mission, Bryan Hunt, in his farewell speech on June 17, 2016 had called on defeated Guyanese political parties to gracefully accept the results.  “Those who lose elections, whether in the past, present or future need to accept their defeat and relinquish power gracefully rather than railing against “the system,” he said.

After GECOM had declared that the PPPC had lost the May 11, 2015 elections, that party had not conceded defeat but had instead maintained that the polls had been rigged. The PPPC has since filed an elections petition challenging the results.

Meanwhile, the former President reiterated that the David Granger-led coalition has returned to Burnhamite (late President Forbes Burnham) policies, and fringe elements and pseudo-intellectuals who have been spouting racism, hatred and bigotry were now in government.  “The unfortunate thing now today- they have become part of the mainstream. They are now hired by this government so the extremes have come to the centre now and it is not pervading this government’s policies,” Jagdeo said.

The 16-month old A Partnership for National Unity+ Alliance For Change (APNU+AFC) coalition government has, for its part, accused Jagdeo of fomenting racial tensions by claiming that his party’s mainly East Indian supporters, Amerindians and pro-PPPC Afro-Guyanese are being discriminated against.