The Alliance For Change (AFC) on Friday admitted that it has done little push for a reform of the Guyana Elections Commission (GECOM), instead saying that its immediate 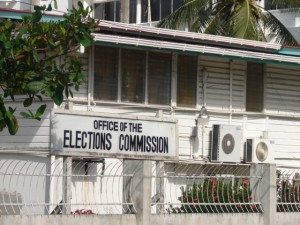 Apart from letting its position known on the need for GECOM to be reform and the model composition of the commission, AFC General Secretary David Patterson said his party has not been aggressively pushing for changes in talks with its governing coalition partner, A Partnership for National Unity (APNU). “It is not one of the topics that have arisen at the moment so far…We don’t want to move anything to displace our priority which is constitutional reform,” he said.

Patterson assured that constitutional reform is high on government’s agenda and that money is expected to be allocated in the 2016 National Budget to facilitate public consultations. A Constitutional Reform task force has already submitted a report to the Prime Minister on how the process should proceed.

On the matter of GECOM reform, he recalled that the AFC had suggested that  the seven-member commission be replaced with a 10-member body  of which three would represent political parties and the remainder would be drawn from civil society.

Guyana currently uses the Carter Centre model that was introduced for the 1992 elections. That model provides for three members each from government and opposition and the Chairman appointed by the President from a list of names submitted to him by the opposition.

Over the years, election observer missions from the Commonwealth, Organisation of American States, Carter Centre, Caribbean Community (Caricom) and the Union of South American States (UNASUR) have recommended that steps be taken to ensure that GECOM is truly independent by having non-political commissioners appointed.

He hinted that campaign financing would be on the legislative agenda of Parliament when that law-making body comes out of its two-month recess on October 10, 2016. The AFC and APNU have long publicly promised to enact campaign financing legislation to ensure greater transparency and prevent dirty money from trickling into parties especially during political campaigns.

Patterson said the increasingly “massive big, long list” of issues that the AFC has been mandated by its members to address include constitutional reform, campaign financing and corruption.

Asked to identify one of the major areas that could help improve relations between AFC and APNU, he cited the need to improve inter-party communication at the lower levels, despite public commitments by the President, Prime Minister and other top party leaders. “That has been the genesis of several of our issues. Because I have not been able to meet with them as frequently as I should, they hold on to the last information they would have received,”  the AFC General Secretary said when asked by Demerara Waves Online News. He hopes that the AFC and APNU will be able to address that constraint.

In the past, there had been concerns that the significance and role of AFC Vice Chairman, Prime Minister Moses Nagamootoo had been reduced by merely handing him responsibilities for the State Media and the National Frequency Management Unit (NFMU).

The Prime Minister is also responsible for spearheading constitutional reform, parliamentary affairs and government business in the 65-seat National Assembly.