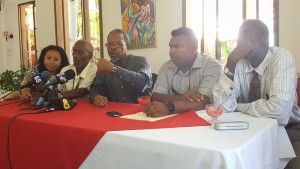 The University of Guyana (UG) is asking government for  a GYD$5.2  billion subvention  in next year’s National Budget, a large chunk of which Vice Chancellor , Professor Ivelaw Griffith said Thursday would be used to pay higher salaries to local and foreign academic staff.

“A significant priority for our educational service delivery is increasing the salaries of lecturers on staff. We cannot go into a new year paying our colleagues so poorly,” he told a news briefing.

After a “very successful budget hearing,” for the GYD$3 billion recurrent and GYD$2.2 billion capital expenditures, he said the package would be soon resubmitted to reflect a “shifting around of some of the elements” of the recurrent and capital sections.

Griffith promised to work with UG’s senior leadership to ensure that “we begin to pay decent salaries to folks.”  Still in the area of improving the quality of staff, the Vice Chancellor said foreigners would be hired to fill several vacancies aimed at ensuring that UG’s credibility is further improved.

“We have to invest some of that recurrent money in hiring new people…and it’s not always something that colleagues like to hear…Some of the staff we are going to need to hire both on the academic and on the administrative side will need to come from outside Guyana.  We will need to attract people from outside that have got skills that we need that are not readily available here,” said Professor Griffith who has worked in senior positions at several American universities.

The recurrent expenditure also caters for better laboratory reagents that are delivered on a timely basis, overseas travel for lecturers to present papers at international conferences and professional staff development to support them to do better.

The Vice Chancellor said the capital expenditure caters for a new library, a new Centre for Communication Studies, fencing of the Turkeyen Campus to prevent animals from entering, the purchase of another tractor to cut the grass and improving the lighting.

UG also plans to hire its own attorney who would work along with students of the Law Department in addressing labour management, intellectual property and other legal issues.

The team of top UG officials also announced plans to improve the supply and quality of electricity, increase potable water pressure,  adequately dispose sewage and reduce flooding associated with heavy rainfall and provide more parking space and vehicular entry and exit. The National Drainage and Irrigation Authority, Ministry of Public Infrastructure and Guyana Water Incorporated are said to be working along with UG in several of those areas.

The country’s publicly funded tertiary institution also wants to generate its own revenue by getting into the merchandising business, holding Distinguished Professor lecture series, endowments and the naming of Schools and buildings.

While UG intends to improve the quality of service being provided by the Turkeyen and Tain Campuses as well as the several branches of the Institute of Distance and Continuing Education (IDCE), the Vice Chancellor ruled out the establishment of another campus in the near future. “We have got to show the students at our Main Campus that we are making appreciable improvement in their facilities and their quality of life before we go making request for new campuses that are going to complicate our life so I wouldn’t want to commit even to a feasibility study of a new campus in Linden,”  he said.

When the University of Guyana (UG) Turkeyen Campus was built in 1964, it had catered for a maximum 2,500 students but now it sewage and potable water systems, classroom and other facilities are under pressure from today’s student population of almost 8,000.

2016-10-06
Denis Chabrol
Previous: Ministry of the Presidency for major rehabilitation
Next: Teenage boy’s mother fined, jailed for cocaine in his suitcase handles