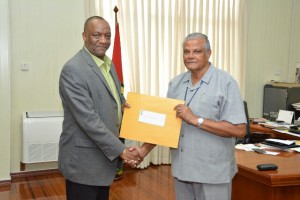 Minister of Sate, Mr. Joseph Harmon handing over the Terms of Reference (TOR) to Major General Ret’d Joe Singh, MMS for the investigations into the allegations of corruption and misconduct made by Mr. Kenwin Charles against members of the Guyana National Broadcasting Association (GNBA) Board.

The Terms of Reference (TOR) for the investigations into the allegations of corruption and misconduct made by Mr. Kenwin Charles against members of the Guyana National Broadcasting Association (GNBA) Board were Thursday handed over to Major General Ret’d Joe Singh, MMS, by Minister of State, Mr. Joseph Harmon, at his office, at the Ministry of the Presidency.

The Ministry of the Presidency announced that Major General Singh will conduct an inquiry into the allegations and is expected to submit his report to the Prime Minister of Guyana by October 31, 2016.

Minister Harmon, in a brief statement, said that President David Granger had requested that the inquiry be conducted.  “[The President] is very confident that you’ll be able to discharge your responsibilities,” Minister Harmon told Major General Singh after having provided him with the instruments of his appointment.  Minister Harmon also assured him of his full support throughout the course of the investigations.

In an invited comment, Major General Singh said that he will work along closely with the Legal Advisor from the Ministry of the Presidency, Ms. Geeta Chandan Edmond to ensure emphasis is placed on that gathering of detailed information so that a report can be completed and handed over to His Excellency, President Granger and Prime Minister Moses Nagamootoo in a timely manner.

“[We are going] to work closely with the Legal Advisor… to map out a time table and a sequence of events, identify those persons, who are pertinent in terms of receiving information from them; whether written or oral… and during that process asking the relevant questions to ensure that we can come up with the determination based on what the report is designed to do,” Major General Singh said.