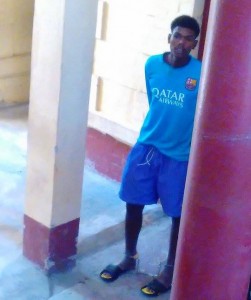 A 19-year-old miner on Friday was Friday ordered to compensate his stepmother with GYD$200,000 or face prison time for stealing household items from her.

It is alleged that between April 1 and August 6, 2014, at Port Kaituma Water Front, Rondel Roy Williams broke and entered the premises of Savitree Harrichand and stole items amounting to GYD$762,000 . The items stolen incl

In presenting the facts, Prosecutor Deniro Jones stated that on April 1, 2014, theHarrichand, who is the defendant’s father’s wife, secured her home with the items intact and left for Georgetown. The Court heard that upon her return on August 6, 2014 she found the house ransacked and the items missing. The matter was reported to the police, but it was only on Thursday (September 29, 2016) that the accused was accused was apprehended, in Port Kaituma, where he confessed to the crime.

At first, Richards was not required to plead to the charge which was indictable, but the Prosecutor requested that the matter be tried in the Magistrates’ Court instead of the High Court.

When ask by Magistrate Ann Mc Lennan which of the two jurisdictions he would like to be trialled, the accused selected the Magistrates’ Court. As such, the charge was re-read to him, after which he was allowed to plead and stated “guilty”.

When asked to explain why he stole the items, Richards stated that he was young and wanted to start life on his own. He was then ordered to pay the $200,000, through the court, to his step-mother or face twelve months in prison.