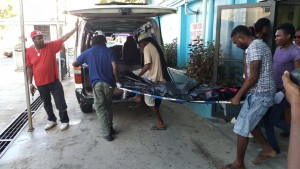 The body of Ryan Sargeant being removed from the Woodlands Hospital, Georgetown.

One person was shot dead and another seriously injured during an altercation at early Monday morning outside Rio Inn, an adult entertainment night spot in Queenstown, Georgetown, police said.

The shooting occurred at about 2 AM Monday, September 26, 2016 outside the nightclub at a parking lot for a mining supplies company north east of the night club.

Other sources said identified one of the dead as 18- year old Ryan Sargeant of North Ruimveldt, Georgetown. His body was reportedly dumped outside Woodlands Hospital, Georgetown where he was pronounced dead by doctors.

Hospital sources said 48-year old Jeffrey Ferrel was shot to his neck and was up to daybreak Monday still undergoing emergency surgery at the Georgetown Public Hospital Corporation. 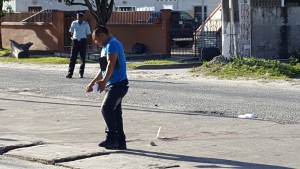 A detective walks past a tagged spot of blood where the shooting occurred outside Rio Night Club, Forshaw and Oronoque Streets, Queenstown, Georgetown.

Divisional Police Commander, Assistant Commissioner Marlon Chapman could not immediately say what was the motive for the shooting.

Investigators interviewed persons at the hospital and outside the night club at Forshaw and Oronoque Streets, Queenstown. They also collected bullet fragments and photographed blood stains.

Police later said in a statement that they were fairly certain who the suspects are. “CCTV (Closed Circut Television) footage is available and investigators are informed of the possible suspects who were involved in an altercation, prior to rounds being discharged