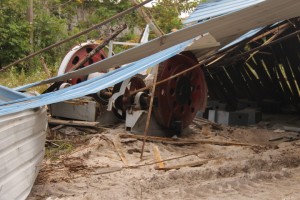 Baishan Lin, is actively considering taking legal action against Guyanese authorities, a day after the Guyana Revenue Authority (GRA) began seizing equipment and allegations that even personal property was being stolen from the company’s workers at Coomacka, Upper Demerara River.

At the same time, the Chinese company is begging the Guyana government for three more years to acquire US$30 million from the state-owned China Development Bank (CDB) and Long Jiang Forest Industry to begin a wood processing plant that could employ as much as 500 Guyanese. “Guyana has to give them a good signal, show them that their investment is safe here and guaranteed here, no more high risk,” Baishan Lin’s Managing Director, Chu Hongbo told Demerara Waves Online News..

The company’s Attorney-at-Law, Roopnaraine Satram told Demerara Waves Online News that the company was considering whether to take the matter to the International Centre for the Settlement of Investment Disputes in Washington DC or initiate legal action in Guyana’s High Court. He said the company was mindful of seeking an injunction locally because that could affect the prospects of arbitration. “The trouble is that the alternative remedies – if we opt to pursue the local remedy we may waive our right to arbitration in Washington. We are weighing our options,” he said.

The Guyana-China Treaty for the Promotion and Protection of Investments provides for the settlement of disputes at that United States-based dispute settlement mechanism. 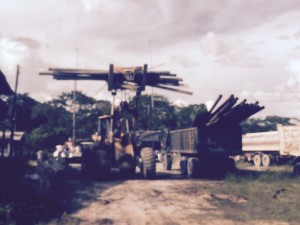 The GRA loading quantities of steel rods and pipes in a truck at Baishan Lin’s operations at Coomacka, Upper Demerara River.

Declaring that it would be a “serious decision” to seek a local or foreign remedy, he said the final move depends on meetings between the company and China’s Ambassador to Guyana, CDB and officials in China.  He said if Baishan Lin decides to continue with the investment, the company would have to go to arbitration to claim damages. “The point about it will be to recover investment which is in excess of over a hundred million dollars over the last seven years or so,” said Satram.

Chu said since the decision by the Guyana Forestry Commission (GFC) to repossess the forestry concession totaling 680,000 hectares and the Guyana Revenue Authority’s (GRA) seizure of wood processing equipment from the company’s base at Coomacka,  the country’s investment image has been tarnished. “We feel angry and hapless about the GRA’s rude and illegal operation. We believe that the GRA’s action has shaken the confidence of investors, all the foreign investors here in Guyana, not only us,” Chu said through an interpreter.

Baishan Lin says it owes GFC about GYD$80 million but denies that it owes GRA GYD$1.58 billion in duties.  “We don’t admit that we owe GRA money,” he said, adding that Baishan Lin enjoys standard duty free concessions like any other investor.  “For GRA, we have no idea how they confirm how we broke the agreement and I don’t know how they calculate these fines for the duties,” Chu added. The latest three-year agreement ends in 2018.

Told that government decided to scrap the deal partly because the company failed to get into value added production, the Baishan Lin official said since negative publicity dating back 2014, the CDB deemed the investment in Guyana high risk and refused to approve the loan for the building of a wood processing facility at Moblissa off the Linden-Soesdyke Highway. At the same time, he said global economic downturn did not result in the company making a profit. 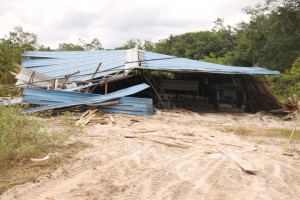 The shed that collapsed over other components of a wood veneer plant after sections were seized by agents of the Guyana Revenue Authority (GRA).

The company’s explanation came one day after GRA officers turned up at Baishan Lin’s operations at Coomacka and loaded seized steel rods and steel pipes as well as components of a veneer wood processing equipment into several trucks.  Baishan Lin’s Trade and Forest Department Manager, Eddie Wang said the GRA did not issue a notice saying that its agents would have been going there to seize equipment. “I tried to explain to (GRA officer) Mr. Singh that these things came a long time to Guyana and duty was paid already. He asked me to show him the paperwork. I said Sir, we were hurrying to come here because we worried about the security guard’s personal security,” he added. Wong said when the agents arrived they took away the Chinese security guard’s phone and placed him to sit outside the building until after the items were loaded and notices of seizure issued. They eventually lined up the workers. Wong claimed that the personal accommodation of the staff was broken into and in one room. He said a shed over the components for the veneer plant collapsed while one of GRA’s heavy duty equipment was removing the parts. “They cannot just behave reckless. They don’t care and they didn’t give a reasonable explanation,” he said. 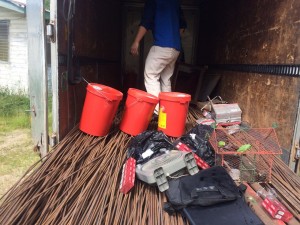 The personal items, except the steel rods, that were packed in a truck to allegedly steal them.

Wang complained that workers sub-contracted by GRA attempted to steal the personal laptop, one fan, two cartons of cigarettes, a cage with two parrots, engine oil and other items owned by staff at the location. Wong said the items had been already loaded in a truck, but it was only after he raised an alarm that they were found and returned. He said repeated efforts to get the police to visit the location to probe the attempted theft proved futile.

The company says it has already invested almost US$100 million in Guyana during the past seven years.