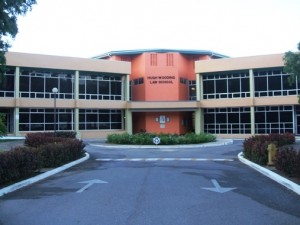 Guyana blocked the Caribbean’s Council of Legal Education (CLE) from discriminating against Guyanese  in gaining automatic entry to that regional institution, according to a statement issued through the Guyana Bar Association (GBA).

In the new agreement between the University of Guyana (UG), University of the West Indies (UWI) and the CLE,  the top 25 UG Law Degree graduates would be allowed automatic entry to the Hugh Wooding Law School (HWLS) in Trinidad each academic year.

Twenty CLE members voted for Guyana, six against and four abstained. By majority vote, the new agreement states that “The Council of Legal Education shall permit no more than twenty-five (25) Guyanese nationals who have fulfilled the requirements of the University of Guyana L.L.B. degree U.G. Department of Law to be eligible for automatic entry into the course of Training at the Hugh Wooding Law School operated by the Council for Legal Education in any academic year.”

A new accord became necessary after the previous one, which had guaranteed automatic entry for 25 UG law grads, signed in November, 2009 expired in November, 2012 . From then on, UG LLB holders had been accepted at the discretion of the HWLS.

According to the GBA, the Guyanese delegation objected strenuously to the CLE, at its 48th meeting held in Antigua, proposing that the new agreement to accept the Guyanese law grads automatically based on certain conditions. That proposed amendment had read: “The Council of Legal Education subject to the availability of places and to such conditions (if any) as the Council may require, shall permit no more than twenty-five (25) Guyanese nationals to be eligible for automatic entry into the course of training at the Law schools operated by the Council for Legal Education in any academic year.”

However, Attorney General and Minister of Legal Affairs, BasilWilliams and UG’s Deputy Vice Chancellor Barbara Reynolds  argued that such a clause would amount to discrimination against Guyanese LLB graduates from UG.

According to the GBA, the Guyanese delegation further objected to the CLE saying that Guyanese students could be placed at the Eugene Dupuch Law School in The Bahamas. That objection was based on the fact that Guyana does not fall into the zone that is covered by The Bahamas.

After Reynolds  objected, the issue was taken to the  general meeting where the Guyanese Attorney General demanded that the offending words – “subject to the availability of places and to such conditions (if any) as the Council may require”- be removed.

The HWLS Principal, in that context, argued that given the congested state of the Trinidad-based Law School, the Guyanese students could take up spaces at the Law School in The Bahamas.

The Bahamas is also considered very expensive to live and study.

Attorney General Williams told the wider meeting that his objection to the second proposed amendment was based on the fact that the CLE’s Professional Law School Regulation 4 (3) states that those eligible to apply to HWLS should be  ordinarily resident in Barbados, Dominica, Grenada, Guyana, St. Lucia, St. Vincent and the Grenadines and Trinidad and Tobago.

The decision comes at a time when Guyana has resumed contributing to the upkeep of the HWLS, and has so far paid US$87,000.